Cameroon has hired consultancy Drake & Bart to design an institutional framework that would help wean the country off World Bank help in managing its mining cadastre.

The Cameroonian authorities have brought the curtain down on the operations of the business travel specialist Global-S-Aviation. And its founder, the vastly wealthy businessman Mohamadou Dabo, is facing prosecution over the contract to upgrade Garoua airport.

President Buhari has put an entirely new team at the helm of the Nigerian military. Both public opinion and the military itself have welcomed the overhaul, while national security adviser Babagana Monguno has kept his job and could even consolidate his influence. 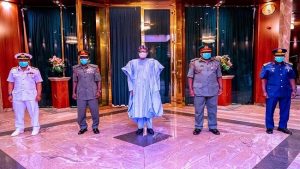 Hoping to be re-elected for a fourth term on 21 March, the Congolese leader Denis Sassou Nguesso recently retained the services of two PR firms in the French and American capitals to shore up his rather tattered international image.

‹ President Sisiku Ayuk Tabe tells Jeune Afrique “As Ambazonians, each one of us has a one-way ticket to Buea” › The United Kingdom and Cameroon Trade Deal: what about human rights?