Cameroon’s soldiers are currently facing new challenges in Southern Cameroons and some of these challenges could be life-threatening.

From every indication, it is not only the ferocious Amba fighters who have struck fear in the minds of army soldiers that are a problem to Cameroon’s army, the poor state of the roads in that region and poorly maintained military trucks have become the new challenge that might cause more problems to the already stretched military.

Amba fighters have killed thousands of soldiers and the fear of these hastily recruited soldiers can be read on their faces when they cross into former West Cameroons. They want to earn the salary, but are scared of doing their job in a region that has been the graveyard of many of their colleagues.

Yesterday, the bad roads in Manyu delivered bad news to the government. These roads have been impracticable for years and the government’s negligence seems to be catching up with it. 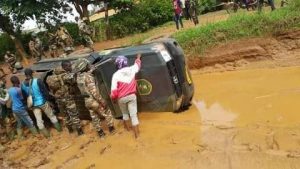 Cameroon government army soldiers on board a military vehicle were seriously injured in a crash late on Friday near Mamfe, the capital of Manyu Division, where the insurgency has always remained a tough challenge to the government.

The Cameroon Concord News Group gathered that the military vehicle slipped off the muddy road and overturned, resulting in 8 soldiers sustaining life-threatening injuries. They are currently in the ill-equipped Mamfe General Hospital which may become their mortuary if they don’t get evacuated.

Though the bad roads could be to blame, many locals told our correspondent in Mamfe that the vehicle was driving at lightning speed going through an area that is still under the control of the dangerous Ambazonia Restoration Forces.

The Francophone Senior Divisional Officer for Manyu whose presence in the Division is very disturbing has been quoted as saying that the Manyu population should remain calm and wait for the outcome of an investigation by the military.

But the population is not buying the administrative officer’s message seriously, especially as the government has been caught on many occasions performing a mincing dance around the truth.

Manyu has remained a hotspot since the fighting started 4 years ago, especially as the Southern Cameroonian President, Julius Ayuk Tabe, hails from this natural resources-rich Division.

The natives of this Division are not going to throw one of theirs under the boss anytime soon and the Amba fighters who have been keeping law and order in the Division have vowed that they will not be downing their tools until Mr. Julius Ayuk Tabe gets released from the East Cameroons dungeons where he has been locked up for more than 2 years.

While Amba fighters are not inflicting more pain on the soldiers, the bad roads are gradually wearing down the war-weary soldiers who have begun questioning the rationale behind this war that could have been avoided.