The former manager of the Indomitable Lions of Cameroon, Winfried Schäfer, has been appointed as the new head coach of Iranian professional football club Esteghlal Tehran, which plays in the highest level of the Iranian football league system – the Persian Gulf Pro League.

During a technical commission session on Monday evening, with Ali Jabbari, Akbar Karegar Jam, Javad Ghorab, Mohammad Nouri, Bijan Taheri and Sirous Dinmohammadi in attendance, it was announced that the 67-year-old German coach will take the helms of the fairly popular Tehran-based team in the near future.

A source close to the club, requesting anonymity, said Schäfer will travel to Tehran within the next two days. Schäfer started his coaching career with German association football club Borussia Mönchengladbach II in 1982. 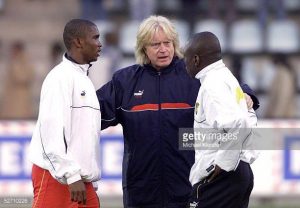 He then signed with Karlsruher SC, and led the team to the semi-finals of the UEFA Cup in the 1993–94 season. The German coach has also worked at VfB Stuttgart and Tennis Borussia Berlin.

Schäfer won the African Nations Cup in 2002 with Cameroon. He clinched the United Arab Emirates (UAE) national championship with Al-Ahli football club in 2006.

Schäfer was hired as Thailand manager on a three-year contract in June 2011. Nevertheless, the German football coach and the Football Association of Thailand mutually agreed two years later to cancel the contract.

After that, Schäfer was named the new coach of Jamaica. Turkish association football manager Fatih Terim had initially been linked with a move to Esteghlal. The Iranian club, however, didn’t reach an agreement with him over financial issues.

Qatar 2022: The Big boys gear up for quarter-finals