Minister Dion Ngute was forced to flee from the building hosting the Cameroon embassy in South Africa during a town hall forum decreed by President Biya. Dion Ngute who was representing the 84 year old French Cameroun dictator had traveled to the Republic of South Africa to explained the so-called actions taken by the Biya Francophone Beti Ewondo regime towards resolving the Southern Cameroons crisis.

The Francophone regime’s action was interpreted by many Southern Cameroonians in South Africa as a pretentious and mocking endeavor to tilt the situation back home and instead engage in a diplomatic mission to convince Cameroonians in the Diaspora to support the ruling CPDM crime syndicate. Dion Ngute who moonlights as Deputy Minister of Foreign Affairs in charge of the Commonwealth and his CPDM gang had a handful of people and other invited individuals in the hall.

Cameroon Intelligence Report understands protesting Southern Cameroonians who came massively in their numbers were prevented from entering into the embassy. However, some forced their way into the embassy after bringing down the embassy gate, chanting songs of freedom and marched into the hall where the meeting was scheduled to take place. 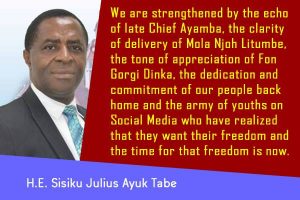 A sister publication Cameroon Info.Net reported that there was total chaos in the hall as the food, drinks and other entertainment items that were reserved for the Cameroonian delegation and their guests were completely destroyed by the angry crowd.

A frustrated Dion Ngute, attempted to engage the protesters in a conversation but was almost lynched. The humiliation suffered by the French Cameroun delegation was complete and total. He reportedly escaped unable to resist the mounting anger and pressure from Southern Cameroonians.