Cameroon state radio and television including many CPDM sponsored news outlets have reported that calm seems to have returned to Bamenda, Buea and Kumba. These three main Southern Cameroon cities were between the 28th of November and the 15th of December 2016, shaken by murderous riots.

However, the strike action orchestrated by teachers and lawyers, the starting point of the popular insurrection is still on. Tension seems to be mounting following the continue arrest and detention of British Southern Cameroonians in Francophone jails.

Issa Tchiroma Bakary, the so-called minister of communications and government spokesman announced on December the 10th that Anglophone protesters arrested would be prosecuted. But he did not revealed the list of people in the hands of the police and the army. The identity of these Southern Cameroon citizens has now been made public through an investigation of the National Commission on Human Rights.

Cameroon Intelligence Report understands the commission revealed the identities of Anglophones arrested as a sign of good faith in order facilitate the work of the adhoc committee created by the Prime Minister and Head of Government. The report indicated that many Anglophone citizens are now been detained in military facilities in Yaounde. The National Commission on Human Rights and Freedoms released a list which some sources say is not exhaustive as several families are still searching for their loved ones whose names do not appear in the list attached to this report. 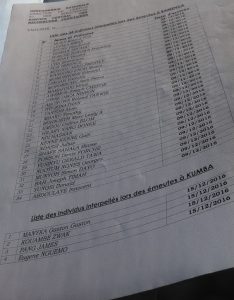 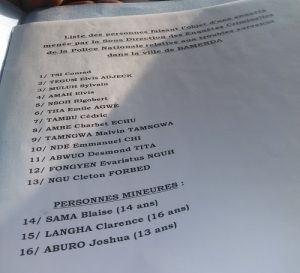 Southern Cameroons Crisis: Biya leaves for Washington via Geneva but might face a storm in the US