First Lady, Chantal BIYA, has distributed Christmas gifts to over 1,000 vulnerable and underprivileged children in Yaounde. This was during a Christmas tree-lighting ceremony at the Chantal BIYA Foundation (FCB) on Thursday 22 December 2016. 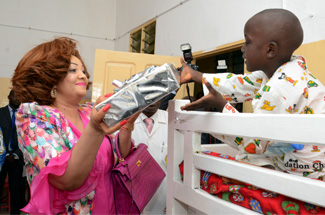 Nearly 100 beneficiaries stood at the main entrance of the foundation, and waved mini flags of the FCB upon the arrival of their benefactor, who was welcomed by Cameroon’s Minister of Public Health, Mr Andre Mama Fouda. This was combined with uniform dance steps in the sweet melodies of a budding artist called Ben Martins.

Mrs. Chantal BIYA, Founding President of the FCB, proceeded with the distribution of the gifts. Sick children, orphans and selected pupils received two packages each from Mrs Chantal BIYA,. This was delivered in four phases. Pupils received their presents in two groups. They were placed at the main entrance of the FCB and at the esplanade of the newly constructed Centre for Paediatric Cardiac Surgery. Sick children in each ward and orphans of the Children First Centre equally benefitted from the foundation’s benevolence. 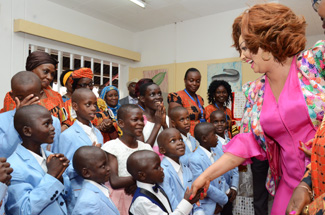 The donation was made simultaneously with a guided tour of the principal units of the FCB, coupled with musical interludes. Traditional dance groups; popular bikutsi artist, Amah Pierrot; the “Chorale Spirit Songs de Meyomessala” choir; and the “Voix du Cénacle” choir, animated at the event.

Mrs. Chantal BIYA chaired a closed-door meeting with the Minister of Public Health. She later took group photographs, with the staff of the FCB and some CERAC members, to close the event.