In an outlandish recourse to superstitious beliefs, the chaplain of the US House of Representatives has staged an emergency prayer intervention inspired by the Catholic exorcism rite to cast out the “spirits of darkness” from Congress.

Reverend Patrick Conroy, who has been the chaplain of the lower chamber of Congress since 2011, recited the demon-expelling prayer on Thursday.

He blamed evil spirits that he claimed have been surrounding Congress for the turmoil that seized the chamber following a vote to condemn the US president’s racist comments.

US President Donald Trump lashed out at four minority Democratic congresswomen earlier in the week, telling them to go back where they came from.

“This has been a difficult and contentious week in which darker spirits seem to have been at play in the people’s house. In your most holy name, I now cast out all spirits of darkness from this chamber, spirits not from you”, the chaplain said from the congressional rostrum, closing his eyes and raising his hands.

House Chaplain Pat Conroy’s opening prayer: “This has been a difficult and contentious week in which darker spirits seem to have been at play in the people’s house. In Your most holy name, I now cast out all spirits of darkness from this chamber, spirits not from You.” 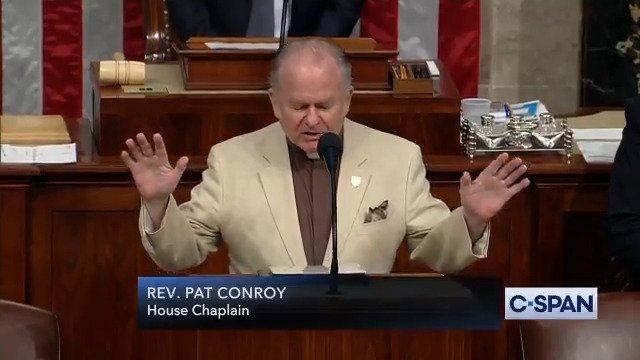 ​In his prayer, Conroy took aim at “the spirit of discouragement”, “the spirit of petty divisiveness which clouds the sense” as well as “any sadness brought on by the frustration of dealing with matters detrimental to the honorable work each member has been called to engage in.”

The chaplain also put in a word for “servants” in the House, praying to “renew the souls of all in this assembly.”

“May your spirit of wisdom and patience descend upon all so that any spirit of darkness might have no place in our midst,” Conroy said.

In an interview with the CNN, the chaplain said the idea for the prayer came to him after Tuesday’s contentious House vote to condemn as racist Trump’s tweets telling four Democrat congresswomen, known as “The Squad”, to go back to fix their “broken, crime-infested” countries of origin before teaching how to run the US.

“I was on the House floor on Tuesday and to me, it felt different than other days. It felt like there was something going on beyond just political disagreement. The energy of the House was very off. No one was relishing what was happening”, the chaplain told CNN, noting that his message was non-partisan and he was not “picking sides.”

Three of the four Representatives were born in the United States, but all are US citizens.

Speaking on the House floor prior to Tuesday vote, House Speaker Nancy Pelosi urged both Democratic and Republican lawmakers to “join us in condemning the president’s racist tweets.”

Trump, in response to the vote, said on Twitter that “those Tweets were NOT Racist,” adding, “I don’t have a Racist bone in my body!”

Those Tweets were NOT Racist. I don’t have a Racist bone in my body! The so-called vote to be taken is a Democrat con game. Republicans should not show “weakness” and fall into their trap. This should be a vote on the filthy language, statements and lies told by the Democrat…..

Trump’s attacks have widely been seen as a bid to rally his right-wing base as the 2020 White House race heats up — at the risk of inflaming racial tensions and deepening partisan divisions in America.