The record books may not show exactly how Algeria won their first Africa Cup of Nations since 1990 and, in any case, it is probably best left to the imagination. Their performances over the past month merit the accolade and that much cannot be denied; the pity was that they dropped any pretensions towards making this final a footballing spectacle after going ahead through Baghdad Bounedjah’s heavily deflected early goal, the result being a tedious encounter that grabbed the attention only during those few episodes when it seemed Senegal might punish their voracious lust for attrition.

It all amounted to a colossal riding of their luck but also a personal triumph for Djamel Belmadi, their impressive coach, who took the job only last August but has delivered a continental title where none was expected. He celebrated with his players, who raced towards a delirious 15,000-strong travelling support at full-time, while his childhood friend Aliou Cissé held a lengthy on-pitch debrief after narrowly failing to deliver Senegal a first title of their own.

Senegal 0-1 Algeria: Africa Cup of Nations 2019 final – as it happened

Cissé might have had better fortune if the referee, Neant Alioum, had not reversed a second-half penalty award, given when the ball struck Adlene Guedioura’s right arm, after a VAR consultation. Spot kicks have certainly been awarded for less in major finals this year. But ultimately Senegal ran into too many of the traps Algeria set for them and the moments when Sadio Mané, as well as the rest of a vaunted front line, could influence proceedings were vanishingly rare.

“I’m so happy for my people, who have waited for such a long time,” Belmadi said. “We have won the cup outside our country for the first time. If you look at where we came from, I took a team that faced difficulties. To achieve what we have achieved, to finish on top of Africa, I have to say it is excellent.”

Despite the deeply frustrating fare they produced, this was indisputably a meeting of the tournament’s two best teams. In the end Algeria capitalised on the slight edge they held.

They had beaten Senegal by a single goal in the group stage and repeated the trick through their one attempt of the game, a moment that briefly confused the stadium into silence.

Boundejah’s burst down the inside-left channel past Lamine Gassama oozed menace but the shot he produced after cutting inside, which looped high into the air off Salif Sané, seemed destined for the athletics track behind the goal. But it spun downwards sharply, eventually dropping into the far corner, and the dawning realisation took a few moments to morph into unbridled delight.

Sané, injured earlier in the tournament, had returned to the starting lineup in place of the suspended Kalidou Koulibaly and Senegal’s weakness had been highlighted in the unluckiest fashion.

It did not take a doctorate in Algerian football ethics to divine that, from there, Belmadi’s side might seek to niggle this all the way out. They have played some fine attacking football in Egypt and such a grim final does not erase any of that. But few have quite as firm a handle on the dark arts and they successfully squeezed the air out of what followed.

“They say you don’t play finals, you win them,” Belmadi said. “I don’t really believe that. We prepared and wanted to play against this talented team, Senegal. It wasn’t our best match. We didn’t have ball possession nor impose our play.” 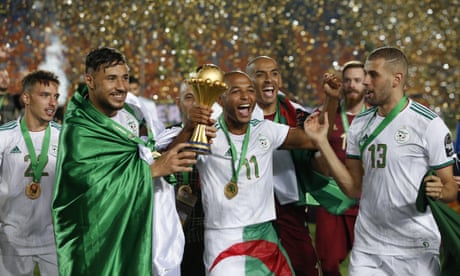 In fairness it made some sense to cede the initiative to Senegal, for whom guile has long been an achilles heel. If their opponents began to get too clever, Algeria simply stuck spokes in the works. Aissa Mandi felled Mané with a crude challenge led from the knee and Ismaïla Sarr found himself on the end of a hack from Ramy Bensebaini. Sofiane Feghouli collapsed near the goalline before dusting himself down when sympathy proved in short supply. When tempers briefly flared on the half-time whistle, their substitute goalkeeper Alexandre Oukidja took a dramatic tumble while Cissé and Mandi argued their way down the tunnel.

The break felt like a relief from the sheer cynicism of it all but the game did open up enough for Senegal to believe they had found a way back. Sarr, their best attacker on the day, made excellent ground down the right before seeing his cross hit Guedioura inside the area. It recalled Mané’s slice of fortune for Liverpool in Madrid two months previously but this time, after a delay of around a minute, Alioum opted to restart with a drop ball.

“We played well and had our chances over the course of the match but against this aggressive bloc we couldn’t find a solution,” Cissé said. Mbaye Niang, from a tight angle after rounding Rais Mbolhi, and Sarr did spurn opportunities to make Algeria regret stalling to such an extreme degree. By the conclusion, though, their dirty work had been done to a strange, unsatisfactory perfection.

‹ US House chaplain holds exorcism to cast ‘spirits of darkness’ from Congress › Switzerland’s Southern and French Cameroun Mediation: A source of glory and shame