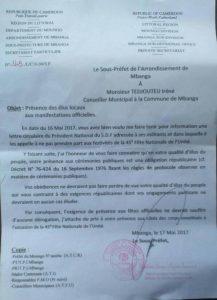 The Divisional Officer for Mbanga has written a letter to a prominent SDF Councillor in Mbanga stating that the presence of the Social Democratic Front (SDF) in public ceremonies is “a republican requirement”. The SDF, through the voice of its leader, Ni John Fru Ndi, decided to boycott celebrations marking the 45th edition of the so-called National Unity Day.

In Mbanga, in the Department of Moungo, Littoral Region, the administrative authority has blatantly refused to accept the SDF decision- a move seen by many political commentators as his attempt to seek for notice and get a major appointment. Responding to a letter from Tedjouteu Iréné, the SDF municipal councilor in the Mbanga commune, informing him of his party’s decision not to take part in the 20th May parade, the Sous-préfet as they are referred to in French Cameroun reminded the SDF of their republican requirement .

“I have the honor to inform you that in your capacity as elected representative of the people, your presence at public ceremonies is a republican obligation (see Decree No. 76-424 of 16 September 1976 laying down the rules of protocol to observe in matters of public ceremonies), “wrote the Sub-prefect.

By Sama Ernest with files from CIN