From when the genocide mastermind and President of French Cameroun declared war against the Southern Cameroons-Ambazonia on 30 November 2017, Cameroon Concord News Group began exposing the details of the preplanned genocide against Ambazonia. Key actors in the preplanning and execution of the genocide closely supervised by Paul Biya himself made public statements which left no one in doubt about their involvement and their significant contribution to the criminal enterprise. Among a plethora of individual and institutional masterminds are Laurent Esso, Fame Ndongo, Biti Assoumou, Okada Bilai, Lele L’Afrique, George Tabetando, Atanga Nji, Philemon Yang, Patrick Ekema, Isa Tchiroma Bakary, Eno Meyomesse, Owona Nguini, television 4, Ernest Obama, CTRV. Added to this inexhaustible list are several military commanders deployed to execute the genocide, crimes against humanity and war crimes in and out the territory of Ambazonia.

George Tabetando, a Southern Cameroonian participant in the planning of the genocide publicly stated during a French Cameroun sanctioned meeting in Buea and in live interviews over CRTV that it was he and Mafany Musonge who advised Paul Biya to impose an internet ban that lasted over three months on the territory of Ambazonia. Mafany Musonge promptly denied his involvement in the criminal conduct.

It is green in our individual and collective memories that the internet ban facilitated the elaborate extermination of armless Ambazonians, the rape of Ambazonia girls and women; paralyzed the economy of Ambazonia, its educational institutions, hospitals, the pillaging of its natural resources and launched the ongoing genocide. The internet ban also facilitated the abduction of thousands of the citizens of Ambazonia to concentration camps and underground dungeons in French Cameroun.  Many of them were tortured to death in detention and many others have since been brought before a court-martial and promptly convicted in sham trials conducted in furtherance of the genocidal policies of French Cameroun.

The abduction and rendition to French Cameroun from Nigeria of the President of the Federal Republic of Ambazonia, His Excellency, Sisiku Ayuk Tabe and members of the Interim Government escalated and internationalized the conflict and the crimes committed in and out of Ambazonia against citizens of Ambazonia.  The President and members of the Interim Government were legally in Nigeria under the protection of the United Nations High Commissioner for Refugees.

The inter-state use of terror, abduction and rendition of His Excellency Sisiku Ayuk Tabe and members of the Interim Government, to French Cameroun outlawed in international law, places French Cameroun and Nigeria as state party apologists and sponsors of international terrorism which threatens world peace and security.   Nigeria through the national security adviser to President Mohammedu Buhari Baba Gana Mugano and French Cameroun through government spokesman Isa Bakary publicly made official statements on behalf of their respective governments admitting the shameful acts of international criminality.  Cameroun Concord News Group warned then, that left unsanctioned by the United Nations, the inter-state use of terror and abduction, by these countries might, provide a fig leaf of legitimacy and embolden Boko Haram and armed groups worldwide in their modus operandi of using terror and abduction to victimize and destabilize significant parts of the world.

The inter-state terrorism by French Cameroun and Nigeria on whom the international community is relying on to combat that form of outlawed international criminality, validates the claims by keen observers that the two states are indeed the sponsors of Boko Haram. This explains why the war against Boko Haram cannot succeed because Boko Haram masterminds cannot meaningfully lead the war against themselves.  The slaughter of hundreds of thousands of poor, jobless and uneducated youth in both countries is a mere subterfuge to conceal the Boko Haram criminal activities of the political, military and economic official structures within both countries.  The real enemies are the crime syndicates in power in Nigeria and French Cameroun and Daesh/Isis political Islamic conglomerate operating in the Sahel and the sub-region of which the ethnic political cabal in and out of the Buhari presidency and the Paul Biya crime syndicate are key participants.

Sisiku Ayuk Tabe and members of the Interim Government of the Federal Republic of Ambazonia may be said to be lucky survivals of the ruthless hit squad that had a mandate to abduct and kill them immediately.  The inter-state cooperation in this crime was not an isolated event. The government of Buhari and Paul Biya are united in economic and commercial terrorism arising from the imperial and neo-colonial exploitation of the oil and natural resources from the Niger Delta, and the Southern Cameroons.

The strong opposition by the exploited communities over many years threatens the pecuniary interests of these masterminds of economic and commercial terrorism.  Boko Haram provides a basis for them to eternalize power and provides an alibi for the channeling of funds to sustain economic and commercial terrorism against Ambazonia, the Niger Delta and South Eastern Nigeria.

Once the occasion to promptly assassinate Sisiku Ayuk Tabe and others failed, the problem about how to dispose of him and others has preoccupied the inter-state coconspirators.   French Cameroun decided to empanel a court-martial that was already very active in the execution of the genocide against Southern Cameroons-Ambazonia to put them on trial.

The court-martial is presided over by Colonel Abega Mbezoa epouse Eko Eko. The other members are Edou Mewoutou and Ngouongue.  The commissioners of government are Engono Eric and Tanjmou Dang Assabe.   The entire court-martial is made up of Beti-Bulu ethnic power elite, members of Essingan and like Clement Atangana, the President of the constitutional court of French Cameroun, members of the CPDM crime syndicate.  In addition to its ethnic composition and royalty, the court-martial is under the direct command responsibility of Paul Biya, the Commander-in- Chief of the French Cameroun genocidal armed forces that are executing the genocide of Ambazonians. 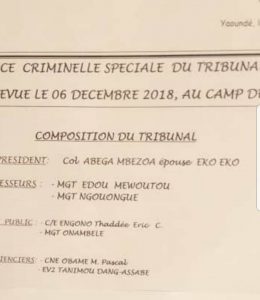 Apart from the multilayered conflict of interests, ethnic, political and military command and control of the court-martialand concerns over this court-martial, the Presiding Judge of the court-martial is the wife of one of the key actors in the prosecution of the war and genocide of Ambazonia Leopold Maxime Eko Eko. He actively participated in the abduction and rendition of Sisiku Ayuk Tabe and others to French Cameroun.  It is therefore a case of the husband overseeing the genocide, the massacres and the abductions of Ambazonians in and outside their country and the wife sitting in judgment to complement the crimes of her husband by providing a legal cover to them.

Leopold Maxime Eko Eko since 2010, is the director general of DGRE (Direction Générale de Recherche Exterieure) formerly known as SEDOC, DIRDOC and CENER. He operates in collaboration with the National Security Council whose Secretary-General is the criminal kingpin, Atanga Nji.

It is a matter of grave concern to Cameroon Concord News Group that Sisiku Ayuk Tabe and others over whom the UN High Commissioner for Refugees has asserted jurisdiction should be allowed by the civilized world to stand trial in a court-martial that itself is actively involved in the genocide and the wider economic and commercial terrorism in Ambazonia.  Cameroon Concord News Group strongly urges the United Nations and the International Community to step forth and stop this creative use of this court-martial tool of genocide from legitimizing this mother of all crimes that the free world promised to banish.   French Cameroun’s empaneled Beti-Bulu ethnic genocidal-martial is a judicial weapon of genocide and must be stopped by the international community.

To this I put my name