Francophone and Anglophone Roman Catholic Bishops: No longer an item 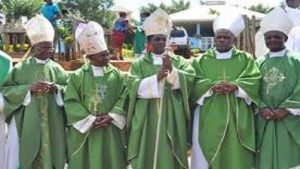 The Roman Catholic Bishops of Cameroon are no longer reading from the same script on the Southern Cameroons crisis. Two divergent views have recently emerged from two camps within the National Episcopal Conference following the massive killings of Ambazonians by French Cameroun troops deployed to West Cameroon on October 1.

Three days after the sad events in Southern Cameroons states and counties, the bishops of the Bamenda Episcopal Province spoke of a “genocide”, “ethnic cleansing” and “irresponsible use of weapons against unarmed Southern Cameroons civilians “. The Anglophone Bishops enclosed their statement in a press release that was made public after a meeting of the Bishops chaired by His Lordship Bishop George Nkuo, the Bishop of the Kumbo Diocese, who is also president of the Bamenda Episcopal Province.

By some strange happenstance, this position was not to the taste of the Francophone Bishops who under the banner of the National Episcopal Conference of Cameroon issued a political statement on the events that occurred in Southern Cameroons. 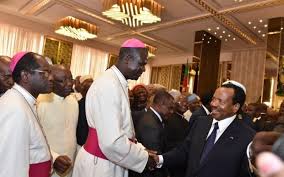 On the 6th of October 2017, the so-called National Episcopal Conference in a communique said “We bishops from Cameroon strongly condemn the violence from whichever source that has rocked the nation.” On Radio France International (RFI), the controversial Archbishop of Douala, Samuel Kleda, attempted a clarification of the position of the church a few days after the publication of the empty statement.

“When we say that we denounce this violence with our last energy, it is because there have been deaths. We denounce this with the last strength of energy. It is certain that the conditions are radicalized, but we must see the interest of the country! In our letter, we called for unity, “he said.

The National Episcopal Conference of Cameroon is an association of bishops. The body does not have a legal capacity that allows it to have authority over bishops. It was created to ensure that the Roman Catholic Bishops speak with one voice. The Anglophone bishops realized that their francophone colleagues were not standing by the truth and took a stand. So a simple and empty release from a Francophone dominated religious body cannot question the position of the Southern Cameroons Bishops.

Yaoundé: The head of counter-espionage summoned in the case of Martinez Zogo’s death