The African Chaplaincy in the Catholic Archdiocese of Dublin has celebrated its 10th anniversary in an event that made the city of Dublin to become the nucleus of a thriving Roman Catholic festival energized by the indefatigable choral group from Swords Centre. A great Eucharistic celebration led by the Most Rev. Diarmuid Martin, the Archbishop of Dublin provided part of the 10th anniversary’s focus that preceded a rich choral nite.

Highlights of the historic evening witnessed the return of regular performers from St Peter’s Phibsboro, Blanchardstown Centre, Balbriggan Centre, Tallaght Centre and Lucan/Clondalkin. But it was the angelic voices from Swords Center and the African Chaplaincy Choir that stole the show.

Under their conductor Comfort Chima, the Swords Centre Choir has become one of the leading collegiate choirs deep within the African Chaplaincy with a growing pedigree of performance that include an emphasis on African gospel music.

“What makes these young choral scholars in Swords Centre so special is not just the diversity of their repertoire but the quality of their singing, and with only about 12 voices they are able to sound twice that number,” noted the Chairman of the Swords Centre, Sir Paul Uzo.

Quality and diversity were both heard in abundance during the various presentations in front of the mammoth crowd that turned out at Westmanstown Hotel under the direct supervision of Fr. Cornelius Nwaogwugwu, the spiritual leader and chaplain. 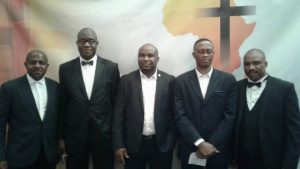 But the Choir from Swords Centre made light of the low Cs, the multi-layered vocal lines, micro-tones and glissandi and, much to their credit, competed brilliantly with all that came from the other centers’. Added to this feat they sang in a typical Roman Catholic tradition. The theme of Christ Our Joy concluded the long evening and the near-capacity audience responded with enthusiasm.

To the glory of God, the African Chaplaincy has continued to grow from strength to strength and in the words of the Most Rev.Diarmuid Martin, the Archbishop of Dublin “Has recorded great improvements in the celebration of spiritual events aimed at bringing the African Community to worship together and deepen their faith.”