The Biya Francophone regime has made available handguns to some fifty administrative authorities in the East region. The divisional officers received the French made weapons on the 24th of August during a ceremony organised by the Ministry of Territorial Administration and Decentralisation.

The MINAT boss revealed that President Biya decided to provide the heads of administrative units with a means of defending themselves in an environment marked by the rise of insecurity and great banditry. Automatic pistols were dished out to all the 33 sub-prefects, some few trusted CPDM district assistants, the four Senior Divisional Officers of Boumba and Ngoko, Haut Nyong, Kadey, and Lom-et-Djerem and above all, the governor of the East Region. 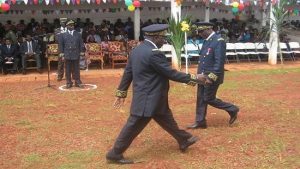 The civil administrators were summoned to a firing centre in Mandjou on August 24 to familiarise themselves with the handling of the weapons. Under the supervision of Colonel Ongolo Jean Joachim, Commander of the Bertoua Military Sector No. 8, the instructors gave the authorities concerned theoretical and practical advice on the use of the pistol.

From now on, these administrative authorities will be able to face, if necessary, armed groups operating in the East region especially in Bertoua, the capital.