A Review of Fr. Maurice Agbaw-Ebai’s Masterpiece – Light of Reason, Light of Faith

In all epochs of the Church’s life, Christian apologists and intellectuals have consistently responded to challenges and questions posed to the faith of the Church.  In the early Church, the teachings of Gnostics and heretics such as Marcion, Celsus, and Donatus Magnus were countered by authentic orthodox Christian apologies by Tertullian, Origen, and Augustine of Hippo, inter alia. The Protestant Reformation of the sixteenth century, triggered by Martin Luther’s “95 Theses” against the Catholic Church on October 31, 1517, caused great turmoil in the Church and beyond. By placing the Holy Bible and Aquinas’ Summa Theologica on an altar in Trent (1545-1563), the Council Fathers offered a systematic response to the theological innovations championed by Luther and other high-voltage reformers. In the Counter-Reformation Church, the Society of Jesus (the Jesuits) and the Dominicans intellectually engaged the propositions of the reformers. It was therefore only right for one of the most articulate teachers of the faith in the person of Joseph Ratzinger/Pope Benedict XVI to consistently engage the Enlightenment, especially the German Enlightenment, whose legacy is only becoming more disturbing, especially in the contemporary Western world.

Fr. Maurice Ashley Agbaw-Ebai’s master class, Light of Reason, Light of Faith: Joseph Ratzinger and the German Enlightenment, offers a critically fascinating account of Ratzinger’s engagement with the German strand of the Enlightenment – the Aufklärung. “Reason” was the prime currency of the eighteenth-century Enlightenment movement that swept across Europe. That is why its motto was “dare to use your reason” (Sapare Aude). As a result, Enlightenment figures such as René Descartes, Immanuel Kant, Georg Hegel, Ludwig Feuerbach, and Friedrich Nietzsche callously attempted to explain the faith of the Church from a purely rationalistic way. They attacked the revealed faith of the Church and proposed a speculative rational faith. Revealed faith was seen as a hindrance to human freedom, especially considering that liberté was one of the slogans of the French Revolution. Fr. Maurice cogently examines the thoughts of the leading Enlightenment figures vis-à-vis Ratzinger’s responses over more than four decades to some of their claims. Some of the propositions enunciated by the Enlightenment are still of grave concern to the Church today. For instance, Immanuel Kant places God in the realm of the noumena because, according to him, God’s existence cannot be justified based on reason. Kant rejects the possibility of the existence of God under the notion that God is not accessible to human beings. Since the noumena cannot be accessed through theoretical reason, Kant rejects the demonstration of God’s existence by speculative or theoretical reasoning. Through his Categorical Imperatives, Kant sees a pathway through which humankind can act and subsist morally in a way that neither God nor religion is required (p.334).

Friedrich Nietzsche postulated the “death of God.” According to Hegel, the enlightenment motto “dare to use your reason” meant use your reason to arrive at the consciousness of God inside the human person. For Hegel, God emerges when the self is no longer antithetical to/with the Other. Hegel calls this process absolute knowing. This absolute knowing or absolute idea is God (p.193). God is not extrinsic to the human being. Such philosophical speculations about God and the faith of the Church are of urgent concern to Joseph Ratzinger. This is why Fr. Maurice writes, “To Ratzinger, the Aufklärung marked an enduring criticism of revealed faith, a critique that the Church must continue to engage and respond to, for it touched on the fundamental relationship between faith and reason, between the God of Abraham, Isaac and Jacob and the God of the philosophers” (p.1). Being one of the most theologically and philosophically savvy popes in the history of the Church, Ratzinger understands fully well the enduring legacy of the Aufklärung in the Western world today. The atheism, secularism, indifference, and hostility toward Christianity in large sectors of the Western world today definitely trace their origins to the Enlightenment movement of the eighteenth century. The author acknowledges this fact when he writes: “To Benedict, therefore, the criticisms meted against Christianity by the Aufklärung are not dated, but continue to be relevant, especially given the pervasive influence of the Aufklärung in the post-Aufklärung culture, as seen in the anonymous Kantians, Hegelians, Feuerbachians, and Nietzscheans, even in the pews” (p.2). It is partly due to the Aufklärung that football stadia such as the Emirates Stadium, Santiago Bernabéu, Allianz Arena, Anfield, and Old Trafford are now the new religious basilicas in the West. Therefore, engaging the Enlightenment and her offshoots is an urgent pastoral necessity for Joseph Ratzinger. This is why in her book blurb, the distinguished law professor and diplomat Mary Ann Glendon points out that, “No pope has ever spoken so frequently or fulsomely of the legacy of the Enlightenment as has Pope Benedict XVI.” 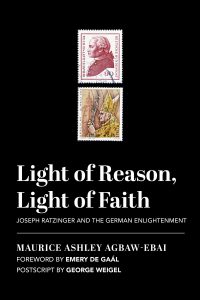 Being a considerate person, Joseph Ratzinger repeatedly stressed and highlighted the positives of the Enlightenment thought. Fr. Maurice writes, “Ratzinger is not interested in rolling back the objectively good gains of the Aufklärung, such as the value of human rationality in moral discernment” (p.4). However, the overarching aim of Ratzinger’s dialogue with the Enlightenment is to reconcile the God of the philosophers and the God of faith (p.91). It is to harness and use the Aufklärung in explicating the faith of the Church. In A Turning Point for Europe? (1991), Joseph Ratzinger succinctly explained the raison d’être for his sustained engagement with the Aufklärung, “One must not only recognize the positive elements of the Aufklärung and contemporary culture, but must continue to bring the insights of faith, revealed faith, to bear on the present order to open the path to the future” (p.23). Unlike Tertullian, Ratzinger cherished a dance between Athens and Jerusalem/faith and reason.

Fr. Maurice’s book is a veritable contribution to understanding the theology of Joseph Ratzinger and the Enlightenment movement. The work truly fills some regrettable gaps in the study of the theology of Ratzinger. In the Foreword to the book, Emery de Gaál asserts, “preoccupation with Aufklärung is an underlying, constantly recurring sostenuto and leitmotif in Ratzinger’s thinking” (x). However, he rightly points out that the term is not treated by secondary literature on Ratzinger and it is not even listed as an entry in the anthology of important terms in Ratzinger’s theology Ratzinger/Benedikt XVI, Kleines ABC des Glaubens. Light of Reason, Light of Faith fills this lacuna (x-xi).

Light of Reason, Light of Faith is a well-researched, picturesque, written book. It is a book written by someone who genuinely and passionately loves his subject matter. The author is thoroughly immersed in the profound encounter between a living “Doctor of the Church” and the Aufklärung and its offshoots. It is a culmination of over two decades of research, scholarship, and reflection on the path of the author. The author first mentioned his love and admiration of the theology Joseph Ratzinger to me in the streets of Jinja, Uganda in 2004, “Giovanni, I really love Ratzinger’s theology of creation”. Our discussion of this subject matter continued in Nairobi, Kenya (2006-2009) and in Boston (2018-). Being an academic myself, I have not come across a personal library with the amount of resources in Ratzingerian theology and Enlightenment figures like that of the author. As a result, the amount of secondary literature used in the book is impressive. As the renowned Professor Peter Kreeft mentions in his book blurb, “Like Ratzinger himself, Father Agbaw-Ebai’s writing is dense and deep but well worth the effort required to engage it.”