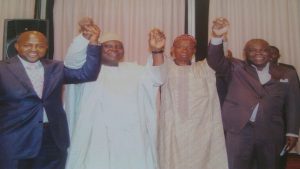 According to well-established sources, Zach passed away on Sunday, June 04, 2017 at the Mount Mary hospital in Buea, in Southern Cameroon.  The veteran football commentator was known to be ill. Described by many around the world as the lord of the radio, Zacharie Nkwo died at the age of 72.

The feats of the Radio Cameroon legend date back to the 80s and was loved by the entire nation for his descriptive reports of football matches including the final phase of the 1984 Africa Cup of Nations in the Ivory Coast that was won by the Indomitable Lions of Cameroon. His partnership with his alter ego Francophone speaker Abel Mbengue remains the best CRTV ever produced.

Presented in football circles as a model, Zacharie Nkwo also had a remarkable style that also inspired several generations of sports journalist like Fon Echikeye. Zacharie Nkwo retired some 15 years ago and took up permanent resident in the city of Buea where on occasions such as the Ascension of Mount Cameroon, his fans could still admire the grace of his style and presentation.

His story and career was documented by senior football reporter Fon Echikeye late last year. Zacharie Nkwo began to express his passion for sport as an amateur footballer and was a goalkeeper with Bamenda PWD.