It was in the strictest of privacy that the President of the Republic and the First Lady celebrated their 23rd anniversary on Sunday, 23 April 2017. The images published by the Presidency of the Republic showed the presidential couple and some members of their family around a cake specially made for the wedding beryl of Paul and Chantal Biya.

The Cameroonian dictator, Paul Biya was born on February 13, 1933 and Chantal Pulchérie Vigouroux was born on December 4, 1970. They got married on April 23, 1994 and have been blessed with two children: Paul Biya Junior and Anastasie Brenda Biya Eyenga.

But the Head of State has three children. Franck Biya, the eldest of siblings, was born from the first marriage with Jeanne Irène who died in 1992 at the age of 57 years. Paul Biya wedded Chantal when she was only 24 years old. The latter is therefore the third first lady of Cameroon after Germaine Ahidjo, the wife of the first president of Cameroon and Jeanne Irene Biya. 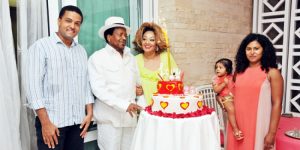