Anthony Joshua will have a swift turnaround to change tactics against his new opponent, Cameroonian Carlos Takam, in Cardiff a week on Saturday.

The new challenger fights in a contrasting style of original opponent Kubrat Pulev, and is a completely different physical specimen.

Comes forward, aggressive, squat and powerfully built, Takam tends to slow as he gasses in the later rounds, but he is capable of doling out some punishment of his own. As an amateur he represented Cameroon in the super heavyweight division at the 2004 Olympics.

As a 12-year professional, Takam has a record of 35 wins, three defeats and one draw, and this will be his first full heavyweight title fight. He was selected because he is the next in line as mandatory challenger after Pulev to Joshua’s IBF belt.

The 36-year-old orthodox boxer is only 6ft 1in – about five inches shorter than Joshua. That is likely to dictate the way Joshua will be directed to dismantle his new rival by head trainer Robert McCracken. 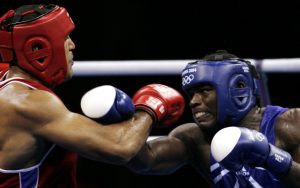 Significantly, in May last year, Takam lost to Joseph Parker, the current holder of the WBO belt. However, he did manage to take the New Zealander the distance before losing on a unanimous points decision.

It may look like a quick turnaround for Takam, in just 12 days, but promoter Eddie Hearn had put a deal in place behind the scenes last month for IBF No 3-rated Takam to be the reserve for Joshua, in line with the IBF’s mandatory regulations.

As a result, Takam has been in training. Yet it is optimistic to think that Takam will be in the kind of shape he would have been had he been able to focus on Joshua in an eight or 10-week camp.

There is the outside chance of an upset against Joshua, having lost to current WBO world title-holder Parker, though that contest took place before the New Zealander had become champion. In that contest, Takam slowed in the late rounds, but showed a great chin, allied with his terse, tough physique.

Takam has been stopped once, against Alexander Povetkin, and, with 27 knockouts in 35 victories, the African fighter does carry some power and is quite capable of fighting effectively on the inside.

Like the contest against Parker, Takam landed some heavy blows against Povetkin but ultimately began to tire in the last third of the contest and suffered a 10th round KO.

Triumphs over aged former world title challengers Frans Botha and Michael Grant, Tony Thompson, and a draw with Mike Perez show that Takam resides as a decent level, along with his experience. But that resume in unlikely to threaten Joshua, in spite of the young Briton’s flaws. That is why the bookmakers have installed the champion as a 1/50 favourite.