As instructed by US President Donald Trump, Vice President Mike Pence has left a sport event, in which the players kneel during the national anthem.

Pence left a Sunday Indianapolis Colts game early after players with the opposing team, the San Francisco 49ers, made the move.

“I left today’s Colts game because @POTUS and I will not dignify any event that disrespects our soldiers, our Flag, or our National Anthem,” he tweeted later.

The president weighed in later, asserting that he had instructed the former Indiana governor to leave if he encountered the symbolic protest against racial inequality in the United States.

“I asked @VP Pence to leave stadium if any players keeled, disrespecting our country. I am proud of him and @SecondLady Karen,” Trump said.

Players from Pence’s state stood during the Star-Spangled Banner and only 49ers knelt.

“We were proud to stand – with all our @Colts – for our soldiers, our flag, and our National Anthem,” he said in a tweet a long with a picture showing him and his wife, Karen Pence, standing tall. 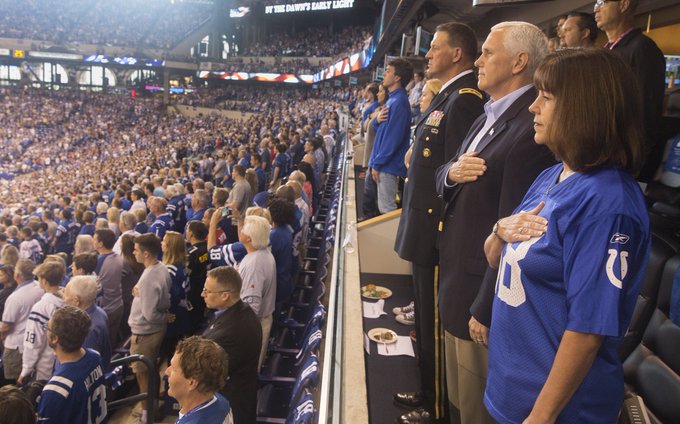 He also took the chance to issue a formal statement, in which he said, “At a time when so many Americans are inspiring our nation with their courage, resolve and resilience, now more than ever, we should rally around our flag and everything that unites us… While everyone is entitled to their own opinions, I don’t think it’s too much to ask NFL players to respect the flag and our national anthem. I stand with President Trump, I stand with our soldiers, and I will always stand for our flag and our national anthem.”

Taking a knee during the US National Football League is part of an effort to raise awareness about police brutalities against minorities such as African Americans.

Death of unarmed black men at the hands of US police has triggered nationwide protests across America over the past year.

During an improvised stump speech in Huntsville, Alabama, on September 22, Trump insulted those protesting is such a manner, insisting that they should be “fired.” Meanwhile, many players, owners and coaches continue kneeling during the anthem around the league.