The Senate impeachment trial on whether to remove US President Donald Trump from office formally began on Thursday as outraged Americans held demonstrations chanting “remove Trump.”

The trial began after seven House Democrats serving as prosecutors presented a pair of articles charging Trump with abuse of power and obstruction of Congress on Wednesday.

The prosecutors handpicked by Speaker Nancy Pelosi (D-Calif.) solemnly walked together from the House chamber over to the Senate with House Intelligence Committee Chairman Adam Schiff (D-Calif.) reading the resolution informing the Senate that his chamber had charged Trump with high crimes and misdemeanors.

The protesters are a part of “Remove Trump,” a progressive group associated with Women’s March, March for Truth and Indivisible.

The protesters spread out a flag on which it was written “Remove Trump,” and then began chanting. Later, they walked inside Senate Majority Leader Mitch McConnell’s (R-Ky.) office.

Just behind my live shot location in the Russell Senate office building, a silent demonstration by “Remove Trump” protestors 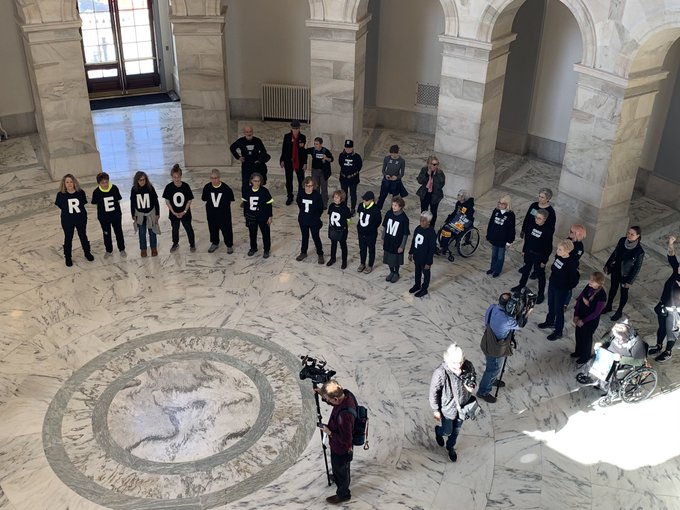 Not so silent now. 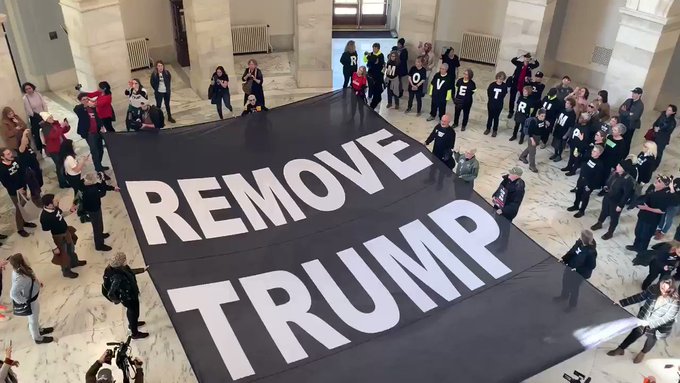 Videos and images released on social media show Capitol Police confronted the demonstrators, however, there was no news of any of them being apprehended.

Capitol Police, however, allegedly threatened to arrest a disabled 85-year-old woman as they were trying to defuse another group of demonstrators in the Hart Senate Office Building.

Trump is accused of secretly holding up $391 million in aid to Ukraine between July and September to pressure Kiev to investigate former vice president Joe Biden, the Democratic frontrunner in this year’s White House race.

The president is also charged with obstruction for holding back witnesses and documents from the House impeachment investigation in defiance of Congressional subpoenas.

He was formally impeached on December 18.