Hundreds of Nigerian refugees who have fled the Boko Haram insurgency to the Minawao camp in northern Cameroon, now have the potential to become professional models after they were trained by the United Nations to be self-reliant and useful to themselves and their communities if they accept to voluntarily return. A majority of the carpenters and seamstresses are mothers.

Twenty-nine-year old Naomi Haman cuts wood with a hand saw to make a bench for the Minawao refugee camp school. The refugee who has been in the camp for two years, says in November 2017 she completed a six month training in carpentry.

“She came to be a carpenter so that sometimes even she goes to Nigeria, she can be able to make somethings like chairs or stools so that it can help her,” says a Nigerian interpreter.

But Naomi’s know-how is already useful and helping her to have some income. The mother of two who had depended on solely on her husband before he was killed by Boko Haram in Nigeria and continued depending on humanitarian assistance after fleeing to Cameroon, says she will receive about $ 5 when she completes and hands the bench to the refugee camp school that supplied the wood. 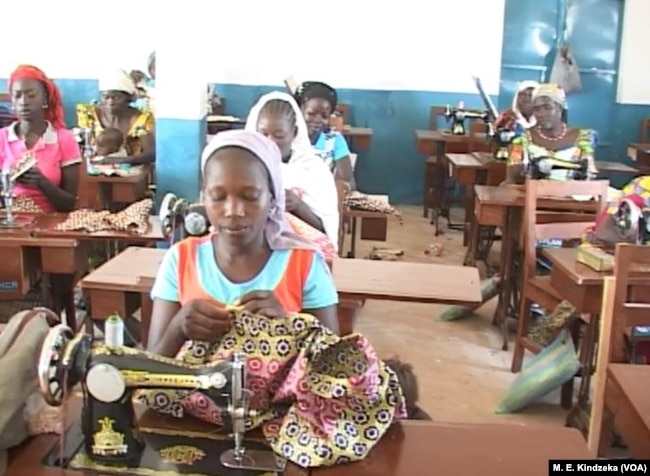 Just by Naomi’s carpentry work shop, Theres Mami works on a sewing machine. The Cameroonian also benefits from the United Nations training program which has involved members of the host communities. Theres says she can now stitch torn dresses and be paid for her work.

She says their trainers started by drawing types of dresses on the board for them to identify and also draw and from there, they moved to various workshops where they were taught to stitch the items they were drawing.

The skills training project is part of UNHCR’s initiative to uphold the social and economic standing of refugees through education, vocational training, livelihoods promotion and self-reliance initiatives.

It encourages refugees and their hosts to interact to combat discrimination and reduce tensions and the scramble over already stretched natural resources. A seamstress trainee works on a sewing machine with a child on her lap.

Mamady Fata Kourouma, head of UNHCR in far northern Cameroon says the training will also be useful to the refugees when they voluntarily accept to return to Nigeria

He says to the UNHCR, training the refugees to be self-reliant is like giving them hope and making them independent and useful to themselves, their families and communities. He says they expect the refugees who are now professionals to continue convincing and training others who are just idling around the camp so that they can be useful and not a burden when they return to their country.

Sixty percent of the Nigerians enrolled in the training are women. They say they will need financial assistance from the U.N. and the Nigerian government to be able to set up businesses when they return.

Culled from the VOA