The war in Southern Cameroons-Ambazonia has entered its fourth year and a new wave of violence is looming for thousands of civilians in Ground Zero and French speaking Cameroon citizens living around the areas bordering West Cameroon. 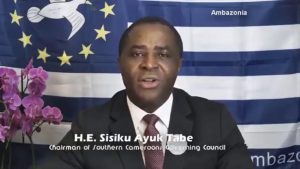 Over the last year, the Biya Francophone regime in Yaoundé has seen its grip on the Southern Cameroons territory weakened and President Biya’s position as head of state threatened. All that remains of the Cameroon government in Southern Cameroons is cornered in Buea and Bamenda where two Francophone governors are still posing as administrators with legitimate authority.

After a string of victories against the Cameroon government military, the Ambazonian Vice President Dabney Yerima said recently that Southern Cameroons Restoration Forces now control all border crossings into the Federal Republic of Nigeria. 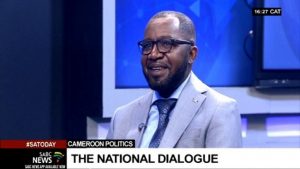 There are reports that Ambazonia Self Defense groups and armed militia sponsored by the ruling CPDM party have engaged in the same kind of repression that sparked the uprising against the Biya French Cameroun rule four years ago.

Armed militia groups with strong ties to the Cameroon government army have been accused of being behind the assassinations of several well known religious figures, including a cream of Roman Catholic priests and an American missionary.

Thousands of Southern Cameroons civilians have died in Cameroon government army attacks on towns and villages over the past four years, and some 35,000 civilians have fled their homes in to the bushes to escape the fighting.

Southern Cameroons is now home to more than 20 different armed Ambazonia groups and thousands of Cameroon government army soldiers battling for control in a war that has displaced more than half a million people to neighboring Nigeria and to  other parts of French Cameroun. Aid groups on the ground have also witnessed numerous attacks from the Cameroon government army.

Our senior intelligence officer in the chief city of the West Region in Cameroon hinted that there is a huge sense of panic now in Mbouda, Baffoussam and Dschang as more Cameroon government security posts come under attack from Ambazonia fighters.

Health facilities in Southern Cameroons have been forced to close and people are dying or suffering in acute pain because they cannot get the treatment they need in places like Akwaya, Menchum, Bui, Ndian, Batibo and Ndop.

Human Rights Watch reported that it is the beleaguered Southern Cameroons civilians who are finding themselves under attack on all fronts. Charities and Aid organizations are at risk of falling foul of the Yaoundé imposed law if they send aid into Southern Cameroons and many aid workers have been caught up in the fighting.

Celebrations to mark World Women’s Day saw the worst bombing ever since the war started with Ambazonia Restoration Forces targeting the Francophone governor of the North West, Lele Afrique.

The UN has warned that continued Cameroon government military assault on Southern Cameroons would create a difficult humanitarian catastrophe in the Sub Saharan region.

Receiving a pat on the back earlier this month, the Russian Ambassador to Cameroon supported the Yaounde regime’s handling of the crisis in Southern Cameroons and condemned aid groups helping Southern Cameroons civilians caught in the fighting.

Southern Cameroonians living in Ground Zero are confused and afraid of what will happen next. In many ways, the Federal Republic of Ambazonia has successfully entered its fourth year of war much as it did in the first. Extreme violence and crimes against humanity plagues the entire territory.

The London protest represented the first Southern Cameroons peaceful demonstration in an event that was attended by Her Majesty the Queen and it came despite little or no action from the Commonwealth.

As long as President Biya remains in power, the situation in Southern Cameroons will not improve. Southern Cameroons refugees and the internally displaced will not return for fear of joblessness, homelessness and arbitrary arrest. The fighting will continue.