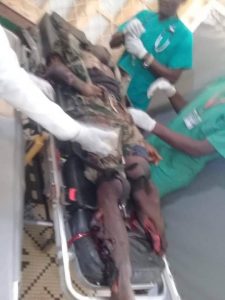 The locally-made bomb that was intended to disrupt Women’s Day celebrations is a clear indication that the government is incapable of restoring security in the two English-speaking regions of the country where an insurgency has been playing out for almost four years. 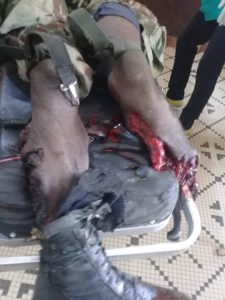 The bomb, which went off early on Sunday, left many people wounded, including more than five soldiers who were on hand to provide security to the event that was attended by the Northwest regional governor, Adolpe Lele L’Afrique, who many thought was the real target of the bomb. 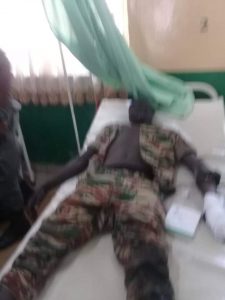 Cameroon has been caught in a web of insecurity ever since the country’s English-speaking minority took to the streets in October 2016 to complain about marginalization and corruption that have blighted the lives of the people of former British Southern Cameroons. 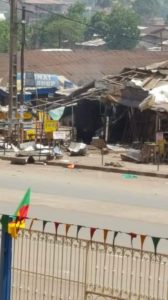 True to its logic, the government responded with military violence, making things worse. A protest that was started by teachers and lawyers was mismanaged by the government and this has resulted in the killing of some 10,000 Cameroonians, including more than 3,000 army soldiers who have been deployed to the two regions in a peace-restoration mission that has brought more pain and suffering to the local population than peace.

The atrocities are simply mindboggling. Government forces which are supposed to protect the population have been running amok in the two regions. No city or village has been spared by the government’s blind anger and frustration.

In the Southwest regions, thousands of civilians have been hacked to death by army soldiers. Some have been burnt alive by militia created and sponsored by the Defense Minister, Joseph Beti Assomo; Higher Education Minister, Jacques Fame Ndongo; and Territorial Administration Minister, Paul Atanga Nji, who hold that only violent military actions could help to bring back peace to the restive regions.

In villages such as Kwakwa, Muyuka, Muyenge, Ossing and Kembong, all towns in the Southwest region, many elderly people have been burnt alive by government forces which are using the notorious scorch earth policy in the hope that it will obtain results very fast. But all their efforts have been in vain.

More than 200 villages have been deleted from the country’s map by alcohol-inflamed and trigger-happy soldiers. The pain and suffering brought onto the people of Southern Cameroons have left everybody in the two regions with a feeling of revenge and many Southern Cameroonians living abroad have decided to finance an armed conflict which they hold could result in independence. 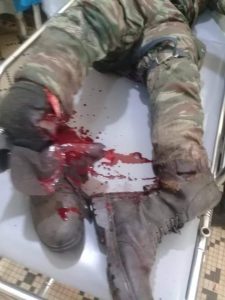 But the most shocking killings were the ones that occurred on Valentine’s Day in Ngarbuh and which caused outrage around the world, causing French President, Emmanuel Macron, to express his frustration with a Yaounde government that has been reluctant to employ peaceful means to address the issues that have triggered the insurgency.

The situation is running out of control and it is even spreading to East Cameroon with many people living in Francophone villages neighboring Southern Cameroons fleeing because of increased military activity and violence in their villages.

As the violence in the two English-speaking regions spikes and the country’s economy takes a nosedive, things are becoming complicated for the beleaguered Yaounde government that is now fighting with its back to the wall. Unemployment is at its highest. Cameroonians have lost faith in the system and these unfortunate situations are gradually creating new complicated ones with the country’s Diaspora jumping into the fray.

Violence has become a staple in Cameroon and fear and tension could be read on people’s faces. On March 7, 2020, some 4 Cameroonian servicemen and women were killed in an attack on a military post in the Country’s West Region.

The attack, which took place in Galim where armed fighters linked to the Brigade Anti-Sardinards (BAS) are known to operate against security forces loyal to the Biya regime in Yaounde, has heightened concerns of the population. 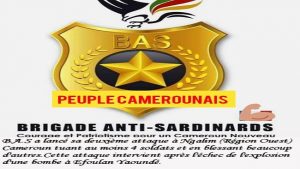 Initially, government sources accused Southern Cameroonian separatists for the violent attack that resulted in the seizure of a huge weapons cache from drunk and unprofessional government troops who were caught off guard. But things became a lot clearer later on Saturday when the BAS announced that the assault was its second military operation against troops serving the Biya regime.

A Cameroon government security source revealed that there were more than 75 attackers who came on motorbikes, adding that the assailants also left with vehicles found at the military post.

A new front has therefore emerged. Cameroon is now fighting many wars on many fronts. The country’s military is spread thin and financial resources to persecute the war are fast drying up. With the Southern Cameroons insurgency growing on a daily basis, it is clear that the government’s strategy has not worked and it will not be working anytime, soon.

As the BAS jumps into the game of violence, it is clear that the Yaounde government has a huge crisis on its hands. Boko Haram is still a lethal threat in the country’s Northern part and Central African Republic rebels have become a millstone around the neck of the Cameroon military, as its forces are constantly being kidnapped for ransom.

Things are getting murkier by the day. Even the separatist fighters are not saints. They are doing a lot to increase the insecurity in the two English-speaking regions of the country. Kidnappings have risen and have become a full-time job for many criminals who pass off as Southern Cameroonian fighters.

Last week, a video emerged with Southern Cameroonian fighters carrying the head of a soldier they had beheaded. The video clearly captures the violence that plays out in the two English-speaking regions on a daily basis. In many towns and villages, many people have been killed by separatist fighters on suspicion of collaborating with the government.

In Ossing, a town some 5 miles from Mamfe in the Southwest region, the regent chief was killed by some criminals whose affiliation with Southern Cameroonian fighters is questionable. It is being reported that little disputes in the town of Ossing might be responsible for the killing of the regent chief, although the contract killers came from Kembong, a town some 6 miles from Mamfe town.

In Ndekwai, a small village some 4 miles from Mamfe, a young man who had run out of luck in Yaounde and had decided to return to his native village, was set up by his cousins. His cousins told the brutal and unregulated Amba boys that he was collaborating with the government. He was picked up by the Amba boys and taken to the forest where he was asked to put his head into a noose that had been prepared for him.

He had no choice but to accept his unfortunate fate despite his effort to prove that he had nothing to do with the government. When he was suffocating, the Amba boys cut the rope and he landed into a grave that had been dug for him. He was left to die slowly in a shallow grave, but one of the Amba boys had an attack of conscience and returned in time to save the young man who was already drifting in and out of death.

He was taken out of the forest and dropped off somewhere close to home, but was warned to be a good Southern Cameroonian citizen or whatever that meant. The two cousins who had set him up had already fled the village when they were told that the same Amba boys were looking for them because they had lied about an honest man who could have lost his life.

That is the daily reality in Cameroon’s two English-speaking regions; a reality triggered by the government’s penchant for violence and a declining economy that has left many young Cameroonians unemployed. If the international community does not intervene sooner rather than later, Cameroon will become another conflict that is being ignored by the international community which is supposed to pre-empt such unfortunate situations.