South West governor, Bernard Okalia Bilai has banned all radio and television discussions on the Anglophone problem in his area of command-a move strongly condemned by the Cameroon Association of English Speaking Journalists (CAMASEJ). Cameroon Intelligence Report has learnt that some journalists who defied the order are now shuttling between friends’ houses because they fear security agents will arrest them at their homes.

The Francophone governor also placed a ban on all discussions on the Anglophone problem in parties, restaurants and all public meetings. This is the present state of affairs in the Anglophone region of Cameroon where the Francophone military regime has made throttling the press a central part of its campaign to suppress dissenting voices.

The Francophone regime has killed scores of innocent Anglophone civilians, proscribed newspapers, arrested dozens of university students, slapped Draconian laws on the press, seized entire print runs of magazines and is currently harassing vendors who sell Anglophone publications. Such attacks have sliced into the income of many media organizations. Some may close. Others have decided to chop their staffs. Still others have sent their reporters underground.

Similar crackdowns against the independent press are sweeping the North West region, where another Francophone governor and the many French speaking divisional officers believe thrashing the media will help them guarantee the reunification and President Biya’s continued stay in power.  Reacting to the situation in the South West region, the National President of Cameroon Association of English Speaking Journalists, Simon Lyonga noted that Governor Bernard Okalia’s actions were unacceptable.

“That all other stations should respect the government’s social and communication editorial policy leaves much to desire. Radio stations and other press organs do have their own editorial policies too and need to respect them also. If this is an attempt to stop us from talking, then It is wrong. And we of CAMASEJ will not give in to that.” Noted Simon Lyonga. 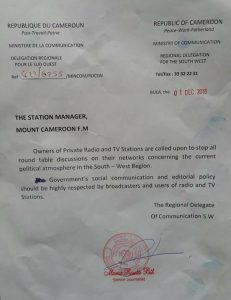 By Soter Tarh Agbaw-Ebai with files from Sama Ernest