A jury in Melbourne in December last year found Pell guilty of abusing two boys — aged 12 and 13 — in the rooms of Saint Patrick’s Cathedral in the city in 1996.

The verdict could not be reported until now due to a gag order imposed on the case.

A statement from George Pell’s only living victim. The other died some years ago. 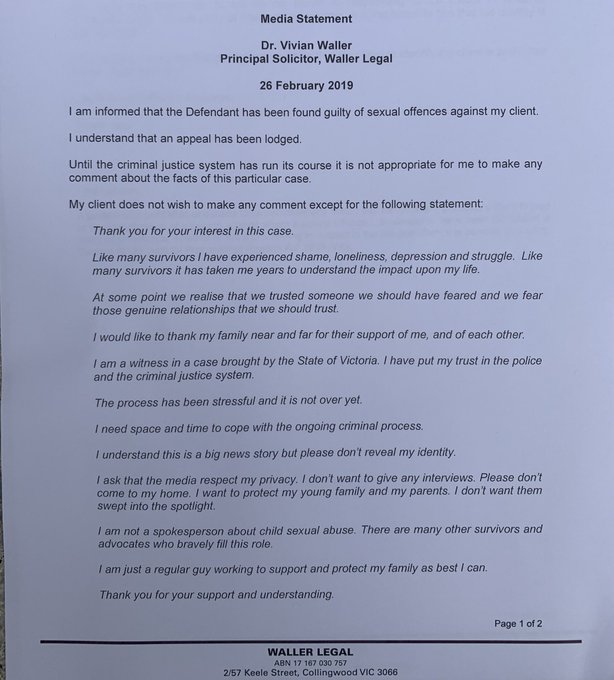 The cardinal, who is free on bail, had pleaded not guilty.

The cardinal, formerly one of the closest advisors to Pope Francis, is due to face sentencing hearings from Wednesday.

Just two days after the unreported verdict in December, Pell and two other cardinals were removed from the Pope’s council of advisors.

The pontiff had previously praised Pell for his honesty and response to child sexual abuse. He has not yet reacted to the verdict.

The Roman Catholic Church has been hit by numerous scandals in the past few years, involving allegations of covering up the sexual abuse of children by priests to protect pedophiles and the reputation of the Church.

Pope Francis himself came under fire last year for not responding decisively to the Church’s sex abuse crisis after it was revealed that children, mostly boys, were being abused by clergymen in their congregations across the world.

He summoned key bishops from around the world to a summit held earlier at the Vatican to discuss the issue and find a solution to protect children from sexual abuse in the Church.

Approximately 6,900 US Roman Catholic priests were accused of sexual abuse with at least 16,900 young victims between 1950 and 2011, according to data from the US Conference of Catholic Bishops.