Qatari authorities have dismissed as “fabricated and unfounded” the recent allegations by Saudi Arabian Sports Minister Turki al-Sheikh that the energy-rich Persian Gulf kingdom could be stripped of its right to host the 2022 Fédération Internationale de Football Association (FIFA) World Cup.

Qatari Ambassador to Germany Sheikh Saoud bin Abdulrahman Al Thani, in a post published on his official Twitter page on Saturday, stated that German-language news magazine Focus had cited sources close to al-Sheikh for the report, and it is Saudi Arabia that is promoting the propaganda against Doha. 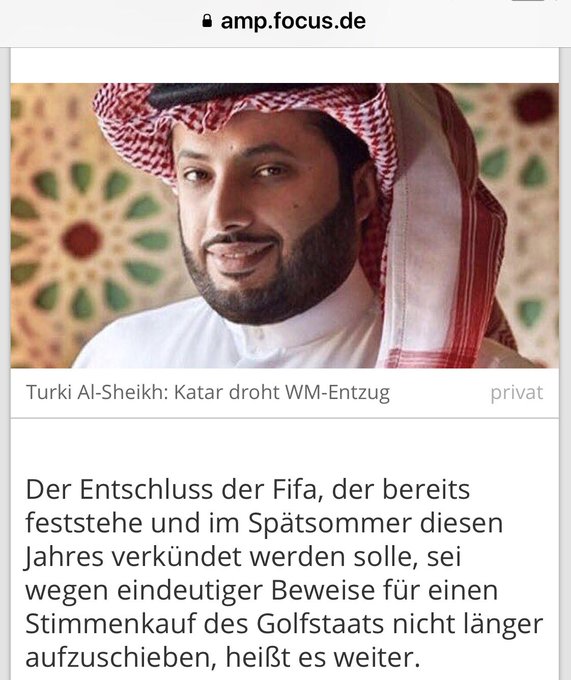 The news was then re-broadcast by Dubai-based Sky News Arabia television news network, and a number of other Saudi and Emirati media outlets.

Shortly afterwards, many people joined the anti-Qatar campaign and took to the Internet. They published tweets that Qatar was in danger of losing hosting rights for the worldwide soccer tourney, and England and the United States were the most likely alternative hosts.

Saudi netizens even went further, and alleged that US President Donald Trump would by no means compromise over the hosting of FIFA World Cup.

When the truth came out and it was clear that the explosive report had been cooked by the Riyadh regime, al-Sheikh posted another post on his Twitter post. “I do not wish that brotherly Qatar is stripped of hosting the 2022 FIFA World Cup. Such assertions have been circulated by a number of international media outlets,” he wrote.

FIFA President Gianni Infantino said on February 18 that Qatar World Cup 2022 would be great and the international governing body was satisfied with the ongoing preparations.

“We are confident that the 2022 World Cup in Qatar will be up to expectations,” he added during a news conference in Nouakchott, Mauritania.

The developments come as Qatar is in the midst of a Saudi-led diplomatic and trade boycott. Saudi Arabia, the United Arab Emirates (UAE), Bahrain and Egypt all cut off diplomatic ties with Qatar on June 5 last year, after officially accusing it of “sponsoring terrorism.”

Qatar’s Foreign Ministry later announced that the decision to cut diplomatic ties was unjustified and based on false claims and assumptions.

On June 9, Qatar strongly dismissed allegations of supporting terrorism after the Saudi regime and its allies blacklisted dozens of individuals and entities purportedly associated with Doha.

On June 23, Saudi Arabia and its allies released a 13-point list of demands, including the closure of Al Jazeera television network and downgrade of relations with Iran, in return for the normalization of diplomatic relations with Doha.

The document containing the demands by Saudi Arabia, Egypt, the UAE and Bahrain also asked Qatar to sever all ties with the Muslim Brotherhood and the Lebanese Hezbollah resistance movement.