I have just read the Presidential Executive Order from Dr Sako ordering the freezing of all existing bank accounts under the department of Economy and Finance. He has also ordered the opening of new bank accounts within three business days by the Treasury General. I read his action with severe disappointment and a sense of anger. I registered my disappointment with our Editor-in-Chief after a Cameroon Concord News Group editorial on Thursday the 28th of February 2019 called for Dr Sako to step down immediately due to allegations of corruption and abuse of state funds. My frustration with that article stemmed from my belief that there are many lives being lost in Ambazonia, and despite Dr Sako’s shortcomings, it would be a huge miscalculation to change leadership at this point. I was wrong. 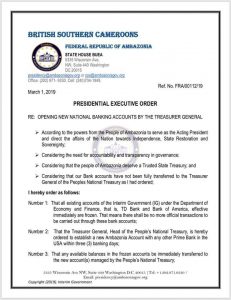 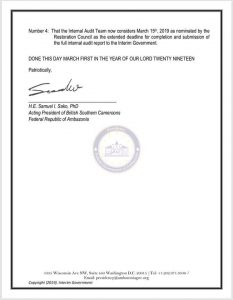 Having read that pitiful and ill-conceived idiocy named a Presidential executive order, one has to look closely and ask what his intention is. After being alleged to have abused the country’s funds, Sako is now dreadfully trying to cover his tracks. This wouldn’t and shouldn’t be allowed to happen. My sources tells me that this order wasn’t a cabinet decision. This therefore begs one significant question- who does Dr Sako think he is? Doesn’t he realise that these sort of presidential decrees remind Ambazonians of La Republique?

The people of Ambazonia can’t and shouldn’t be taken for fools. We have been made to understand that there is an audit currently going on. The audit report is due to be published soon. All arms of government are due to be audited. Anyone who is found to have abused funds will have to resign or forced to leave office. Until this report is published, any attempt to undermine the audit by freezing bank accounts is unacceptable. Bank accounts are inanimate entities. They don’t embezzle money. People do. Men and women with evil intentions do. Sako has to understand that the opening of new bank accounts will do nothing. It’s offering no answer to the problem. He is the problem. He is the head of a government that is in the midst of a huge financial scandal. The buck stops with him and as a man of God, he has to do the honourable thing and go now.

As a nation, we must collectively accept that the experiment to appoint an unemployed and failed pastor who had personal financial challenges was a grave misjudgement. Like all mistakes in life, it only becomes an issue if it remains undetected. Once a gaffe has been recognised, the intelligent thing to do is to seek remedy. The only remedy now is for the Restoration Council to act and do so now.

We must put on record that Cameroon Concord News Group supports the Interim Government. But our first duty is to report facts and hold government officials to task. We shall never fail in our duty as an independent media outlet. As a country, Ambazonians should be wary of nurturing monsters. These monstrosities must be stopped whenever and wherever they raise their ugly heads as they will be even bigger and nastier in Buea.