Bishop George Nkuo embarked on a visitation to St Mary Magdalene’s Parish Nkar in what many have described as a concerted push for efforts favouring peace over conflict in Southern Cameroons. The Roman Catholic Bishop of the Kumbo Diocese reportedly made the trip over the weekend amid road blocks by troops loyal to the regime in Yaounde and Ambazonian Restoration Forces. 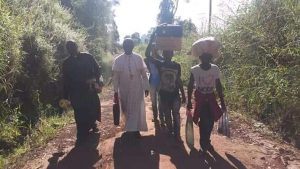 The mission to Nkar has prompted a host of questions about the Bishop’s security given continual violent clashes there between Cameroon government forces and armed Southern Cameroon fighters. The Chairman and Editor-in-Chief of the Cameroon Concord News Group, Soter Tarh Agbaw-Ebai raised the issue of the Bishop’s visit to Nkar in today’s editorial meeting.

Despite the concerns, Southern Cameroonians in the Diaspora have opined that Bishop Nkuo’s visit to Nkar had a high symbolic value for peace in Cameroon and for the entire Anglophone regions.