International Women’s Peace Day is celebrated on April 26, 2019 with the vision of “Cessation of War and Realization of Peace” to protect precious lives from war in solidarity with 3.8 billion women around the world and to pass on peace to the future generations with the heart of a mother. It was officially proclaimed by the International Women’s Peace Group, an NGO in consultative status with UN Economic and Social Council (UN ECOSOC).

On the afternoon of the 26th (KST), the 2nd commemoration event was held in South Korea during which there was an urge for support of the DPCW, which is the answer to achieving peace, to the heads of state of each country. There was also a time to urge interest and participation of women around the world to partakein peace activities so that the current crisis in Myanmar can be peacefully resolved.

The online commemorative event included a video of congratulatory remarks by Chairman Man Hee Lee of HWPL and by Judge Louis Otis, a Deputy Judge of the European Organisation for the Exploitation of Meteorological Satellites (EUMETSAT). There was also the reading of a handwritten letter of peace by Reverend Dorothea Gopie, Chairperson of the Western Cape Provincial Chaplaincy, from the Republic of South Africa, followed by a video of activities promoting DPCW and a congratulatory performance. About 1,000 members in Korea and internationally attended the event. 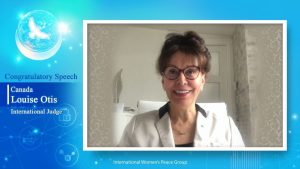 In her commemorative address, Chairwoman Hyun Sook Yoon said, “Two years ago today, thousands of women from all over the world gathered together at the Independence Hall to celebrate the proclamation of the “International Women’s Peace Day” and we are now celebrating the 2nd anniversary. There are voices of sadness and concern from citizens around the world regarding the current bloodshed in Myanmar.During this, IWPG issued a statement calling for a peaceful resolution.”

Chairman ManHee Lee said during congratulatory video that, “we are one family of the world. Let’s unite and fulfill a world of freedom, peace and love.” And concluded the congratulatory speech with, “HWPL wishes for the tremendous development and glory of IWPG.”

Judge Louis Otis from Canada said, “The mission of IWPG is to create a world where 3.8 billion women around the world will unite to realize gender equality, to seize war, and to achieve world peace.” She also added, “IWPG is carrying out activities, campaigns, and cooperative events around the world in order to develop collaboration and cooperation. IWPG is supporting and urging for the declaration of peace to become a legally binding instrument and is promoting for it to be established as an international law. IWPG’s ultimate goal is to provide peace education for women and to transform the culture of discrimination, violence, conflict into a culture of peace.”

IWPG, headquartered in Korea, has 100 branches throughout 130 countries around the world. The “International Women’s Peace Day” commemorative event will be held every year to urge support ofthe 10 articles and 38 clauses of the “DPCW”. IWPG stated that the “Handwritten Letters of Peace” sent to heads of state and the activities to “Spread a Culture of Peace” will continue to expand.