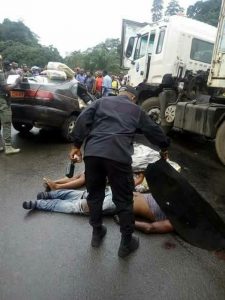 Several people are reported dead and others injured in an accident involving a car and a truck at the Mutengene area. Police bosses in Southern Cameroons have confirmed that the accident which occurred earlier today was a bad head-on collision after the car was overtaking several vehicles when it collided with the truck.

This item is still developing