Germany: Moderator Fonki Samuel calls for unity and peace amid crisis in the PCC

The Moderator of the Presbyterian Church in Cameroon, the Rt. Rev. Fonki Samuel Forba reportedly on holidays in Europe made a surprise stop at the PC Ruhrgebiet in the city of Mülheim an der Ruhr in Germany on Sunday the 14th of July 2019. 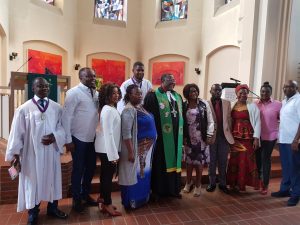 Rev Fonki Samuel Forba who is now heading a sinful and disgraceful Church encouraged Christians to follow the words of Christ as recorded in John 8:1-11. “Learn to remove the log from your eyes before removing the dust from others eyes“.  The man of God observed during his homily that Christians should learn forgiveness and peace of mind as prescribed in Christ’s gospel.

The head of the Presbyterian Church in Cameroon called for prayers for all those displaced by the war in Southern Cameroons and highlighted the fact that many congregations and presbyteries in the English speaking regions were grounded due to the ongoing crisis.

Rev Fonki pointed out that Christians should protect the church of God no matter what. The Moderator’s presentation was centred on peace and reconciliation both on the on-going crisis in Southern Cameroons and the conflict within the PCC.

The PCC has been rocked recently by numerous financial scandals with many Christians saying that the trip to Europe is unnecessary and an attempt by the Moderator to escape from the heat generated by the crisis in the church.