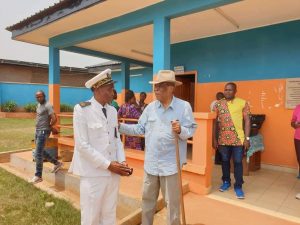 French Cameroun political elites including opposition parties in Cameroun are viewing President Paul Biya and Senate President, Marcel Niat’s latest impromptu visits to Europe-Biya to Geneva and Niat to Paris for medical check-ups as a sign that both nonagenarian Francophone leaders can no longer cope and should step down and pave way for some new and energetic blood to take over in French Cameroun.

A cream of French Cameroun political elites have recently opined that President Biya, Senate President Marcel Niat and House Speaker Cavaye Yegue Djibril’s old age issues are costing Cameroun heavily and their frequent visits to Europe for medical care are draining the already dry state coffers because the trio including other barons of the CPDM crime syndicate spends millions of Euros on every trip, and all that money is taken from a country where people are dying from mosquito bites and thousands are being killed in Southern Cameroons.

Cameroon Intelligence Report correspondent in Yaounde said Amadou Ali who moonlighted as Vice Prime Minister in charge of Relations with the Assemblies was forced to leave the cabinet due to a lot of health-related challenges. Martin Belinga Eboutou reportedly left the country for Canada and we gathered from family sources that his time on earth is drawing to a close.

After his 86th birthday celebration in Mvomeka’a, many French Cameroun CPDM barons were heard murmuring privately that Biya must rest because at 86 – he cannot keep up with the demands of the highest office in the country.

We understand Biya and Niat trips to Europe to seek treatment for their age-related health problems are costing the country millions of dollars. Europe is the most expensive destinations in the world but the ruling CPDM crime syndicate spends the tax payers’ money without any shame.

Speaking after seeing a picture of Senate President Niat on social media and that of President Biya recently, our senior international correspondent Chi Prudence Asong pointed out that old age has no cure and Biya, Niat and Cavaye should realise that and do themselves and Cameroon a favour by retiring now.

“Biya, Niat and Cavaye are not doing anyone a favour at this moment. They are doing Cameroon a major disservice. They have become major national liabilities and we say they should call it a day. Biya’s Beti Ewondo kinsmen and women are looting with passion and he has no control over them that is why they want him to die in office.”

In his 36 years in power, Paul Biya has been spending more time out of the country than in and this is a national security threat because Cameroon can no longer afford to have a commander-in-chief who is always absent.

By Rita Akana and Kingsley Betek in Yaounde