Francophones: Cabinet Minister appointed Head of Department at the University of Yaounde 1

On Friday the 25th of August, the final list of the entrance examination for the first year into the Ecole Nationale Supérieure Polytechnique (ENSP) of the University of Yaoundé I for the academic year 2017-2018 was made public. Candidates subject to the presentation of the originals of their baccalaureate or GCE Advanced Level certificates are declared definitively admitted and ranked in order of merit.

But on the list of the 180 admitted, is the name Tsanga Mba Monique Raphaelle Inès, ranked 163rd. Curiously, this same name is on the waiting list, where there are 25 other students. This is typical of the anti Anglophone Minister of Higher Education, Fame Ndongo and it is not the first time that microm macros are seen on the lists of candidates admitted to different competitive examinations. A few years ago, a similar case was found on the lists of admissions into the Institute of International Relations of Cameroon (IRIC).

The situation is the same with the management following the appointment of persons who have died in positions of responsibility in all the state universities, in particular those of Douala and Maroua. One of the most interesting case recorded recently was the appointment of Laurent Serge Etoundi Ngoa, the current Minister of Small and Medium Size Enterprises (seen here) as head of department of Physiology in the Faculty of Science at the University of Yaounde I. 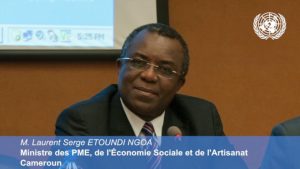 The incompetent Minister Jacques Fame Ndongo, attempted an explanation on the disgraceful situation by stressing that before being a cabinet minister, Laurent Serge Etoundi Ngoa was a university lecturer. A highly placed CPDM official was heard murmuring privately that “No one takes us serious anymore.”

‹ CNPS: How Francophones are destroying the country › Combating Ghost Towns: Biya regime taking the last kicks of a dying horse