CNPS: How Francophones are destroying the country

The management of the National Social Insurance Fund (CNPS) has announced to the public that it paid 4 million CFA francs in 2007 to the the editor of “La Tribune de l’Est Economie”. This recent revelation has made the war between the GM, Alain Olivier Mekulu Mvondo and Chantal Roger Tuile, the editor of La Tribune more intractable in an affair that has already put both men at daggers-drawn positions. 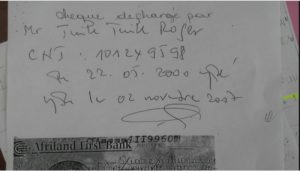 The National Social Insurance Fund noted in the statement released today Monday the 28th of August via the company’s Twitter account that it is determined to file a complaint of embezzlement of public funds against Chantal Roger Tuile at the Special Criminal Court.

The CNPS reaction comes after a televised presentation on Equinox TV on Sunday during which the editor-in-chief of La Tribune de l’Est Economie revealed that Mekulu Mvondo was heading a corrupt pension fund. In the Equinox TV conversation, Roger Tuile revealed that the GM travelled with a delegation of 23 persons including mistresses to Spain to watch an el clasico football encounter.

The general manager of the fund will be guest tomorrow Tuesday on the program La Grande Interview on Canal 2 International presented by Jean Bruno Tagne probably to answer the accusations brought against him by Chantal Roger Tuile.