With dozens of people already packed into stands pretending to be CPDM militants and music blaring to warm up the crowd, CPDM’s Eyumojock rally to celebrate the party’s 32 anniversary was abruptly abandoned over security concerns as Southern Cameroon protesters chased away the so-called external elites out of town.

Minutes after Chief Obenofunde Moses former General Manager of PAMOL described by the late Prof. Peter Agbor Tabi as the worst Manyu MP ever was to have taken to the podium, the announcer suddenly pronounced the event as illegal in Southern Cameroons territory and stones and sand started raining on those who had taken up sits in the grand stand.

Scores of Southern Cameroon protesters raided the venue and the high powered delegation including security agents had to escape for their lives. Chief Moses Obenofunde and the members of the CPDM delegation ran at lightning speed abandoning their cars, shoes and hand bags.

Around Manyu, West Cameroonian protesters have interrupted virtually every CPDM event and Nigerian flags have been hoisted all over Akwaya Sub Division. Elsewhere, Francophone security agents tried to identify and exclude potential demonstrators before they enter any CPDM events, but large groups of protesters had waited in line for seats in Mamfe and Tinto and engaged in tense disputes with highly placed government officials. 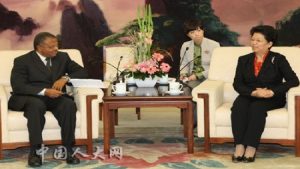