EU leaders called for clarity on Friday from Britain before considering any delay to Brexit after a series of chaotic votes by MPs, just two weeks before the deeply divided country is due to leave the bloc.

Quitting the EU after 46 years on March 29 remains the legal default unless EU leaders unanimously grant Britain an extension, with the issue likely to dominate a March 21-22 EU summit in Brussels.

The length of any possible delay will depend on the outcome of another parliamentary vote on the twice massively rejected Brexit deal struck by Prime Minister Theresa May with EU leaders.

The government said it would ask for a “technical” delay until June 30 to pass necessary legislation if MPs finally approve the deal next week.

If MPs vote against it for a third time, the government has warned it will be forced to seek a much longer delay.

Proposal ‘must come from Britain’

“It is very clear that the next steps, the next proposal on how to move forward must come from Britain,” German Chancellor Angela Merkel’s spokesman Steffen Seibert said in Berlin on Friday.

French President Emmanuel Macron’s office said that if the current deal is rejected again “a clear and new alternative plan” must be presented or else Britain would have to leave the EU with no agreement. 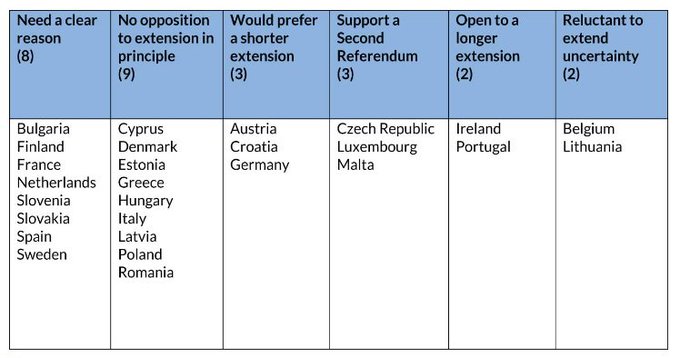 Dutch Prime Minister Mark Rutte said the Netherlands is open to delaying Britain’s exit, but will seek guarantees that the extra time will be used to break the political impasse in London. A short, technical delay of a few weeks to implement a deal would be straightforward, he said, but a longer postponement would be more difficult.

“If they want a delay the British need to explain how they plan to ensure a different outcome,” Rutte told journalists in The Hague.

Similarly, Denmark’s foreign minister suggested that, if Britain is going to ask the EU for a delay, it should explain how it would be used to find a solution.

“We’re still awaiting clarity from the British side. Before we get that we cannot help the Brits,” Anders Samuelsen said Friday in an e-mail to Reuters.

The British government is hoping that talk of a long delay to Brexit will persuade hardliners in May’s own Conservative Party and its ally, the Democratic Unionist Party (DUP), to get behind her deal.

Speaking on a visit to Paris, Irish Foreign Minister Simon Coveney said “everyone would welcome” MPs approving the deal and Brexit being briefly pushed back to get the necessary legislation through.

But, asked about the possibility of a longer delay, Coveney said: “I think many EU leaders will be very uncomfortable with a long extension.”

He said Ireland would only consider it if it was to “implement a clear plan and strategy to reflect on and perhaps change direction in regard to Brexit”.

EU leaders have hinted they could support a longer delay only if Britain were to drop its red lines, particularly its insistence on leaving the EU customs union so as to pursue an independent trade policy.

On currency markets Friday, the pound jumped versus the dollar and steadied against the euro after a week that saw wild fluctuations for the UK unit triggered by the Brexit twists and turns in parliament.

The UK is barrelling towards the March 29 Brexit deadline with no approved EU withdrawal agreement and a prime minister who appears to have lost control over her bickering cabinet.

On Thursday, MPs voted to ask EU leaders to simply push Brexit back in a bid to head off a hugely disruptive end to their partnership.

May struck her agreement with the EU in November after nearly two years of tortuous negotiations.

But the deal has remained deadlocked in the British parliament, chiefly by disagreement over the so-called Irish “backstop” a measure to keep trade flowing and avoid barriers at the border between Northern Ireland and the Republic of Ireland.

Lawmakers voted on Wednesday not to leave without an agreement but still lacked a clear roadmap on the way forward three years after Brexit was approved in a bitterly divisive referendum in June 2016.

MPs also rejected a call to hold a second Brexit referendum a blow to the hopes of a large number of Britons who still dream of keeping their European identity.

The political crisis has weighed heavily on the economy, dragging down growth and forcing businesses to delay investment decisions.

Carolyn Fairbairn, head of the Confederation of British Industry, Britain’s main business lobby, has called on parliament to “stop this circus”.

Following the votes against a no-deal Brexit and for a delay, the CBI tweeted there was “still some common sense in Westminster”.

“But without a radically new approach, business fears this is simply a stay of execution,” it said.

(FRANCE 24 with AFP and REUTERS)