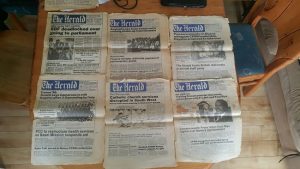 Dr. Boniface Forbin has met his end in his home in Yaoundé.  The circumstances surrounding his death have not been made public by his family. The publisher-editor’s death may not be separated from The Herald Newspaper. Former newsmen and women including the Herald People have observed that at the inception of multiparty politics in Cameroon, relations between the Herald and the Biya administration took a nose-drive and the Herald Group took an unfriendly view of the regime (e. g, Biya’s fictitious anti-corruption campaign). Such became the unfolding of fishing in trouble waters…

Forbin resigned from the defunct Cameroon Airlines and started The Herald Newspaper. He understood that media freedom was better in Saddam Hussein’s Iraq and North Korea than in Cameroon. He successfully taught Anglophone journalists the difficulty of being a reporter in Francophone dominated Cameroon.

Forbin and his kinsman Asong Ndifor invested time in training young correspondents on the challenge for Journalism in Cameroon. Forbin had the support of Napoleon Viban and men like Dr. Joachim Arrey, the late Kum Set Ewin, Peter Ngea Mbeng, Tabe Paul Blondo, Ekinneh Agbaw-Ebai, Gerald Ndikum and the Herald Newspaper told the world that the story of the press in Cameroon was that of persecution and perseverance and closure of newspapers, often without an enabling law.

Forbin declared his unflinching support for the Publisher of the Cameroon Post Group, Paddy Mbawa over the Epey Mandengue Affair. Paddy Mbawa had been flogged, head shaved with broken glass and photos published by some sister Anglophone newspapers for 30 pieces of silver. Forbin stood shoulder-to-shoulder with the wives of journalists who suffered persecution.  He was in a Douala hospital to see the wife of the late Pius Njawe who lost her baby after her husband was forced out of their home and taken to the New Bell prison.

He told this reporter when he joined the Herald from the Weekly Post that “When you really want to expose human rights abuses in Cameroon… it becomes more dangerous.” Rest in peace Doc