Social media activists are claiming that the Cameroon army bussed school children from other regions to the restive Anglophone region for the annual Youth Day celebration.

A video shared on Twitter showed a military truck with soldiers helping school children descend. Another military pickup with armed men is closely behind the truck.

The southwest and northwest (Anglophone regions) of Cameroon have been restive since October 2017 when secessionist leaders decided to declare independence under the so – called Ambazonia Republic name.

This years’ youth day celebration had been declared off by separatists in the two regions where social disruption has led to the closure of some schools and people fleeing their homes into the forest and into neighbouring Nigeria.

The state-run CRTV on its twitter handle shared two photos of students taking part in the march past in Buea, capital of the southwest region and another key town, Limbe. 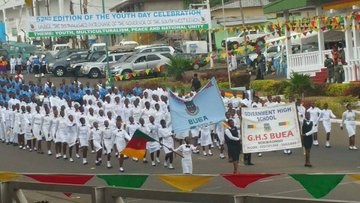 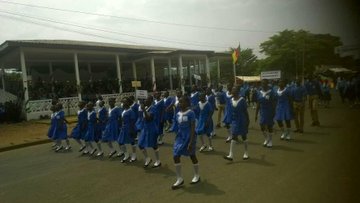 Cameroon celebrates every February 11 as Youth Day on which occasion the country reflects on the awareness and recognition of youth significance for the country.

The date of celebration was changed to February 11 in 1963. The day is celebrated by parades, in which school children and youth groups participate. The holiday is very popular among young people and it’s used to encourage the Cameroon’s youth to renounce violence and other unsavory behaviors.

‹ Reboot Conference: The Ambazonia Recognition and Collaborative Council or the Stilbirth of Another Consortium by Another Name › Ruler since 1982, Biya turns 85 as strife grips parts of Cameroon