Cardinal Tumi: God will ask President Biya, ‘how have you ruled Cameroonians that I entrusted to you?’ ‘.

Cardinal Christian Tumi has once again addressed issues related to the role of the Holy Roman Catholic Church in the political sphere. In a recent interview granted germinalnewspaper.com, the retired prelate also made his opinion public on democracy and federalism in Cameroon. A synopsis of the conversation published by Cameroon-info.net indicated that the 86 year old has not changed his positions on the management of Cameroon. This is what the former archbishop of Douala had to say:

“The Church in Cameroon works for the good and peace of all, despite the difficulties encountered and human littering of its path. We must never forget that the Church is also human even though the attitudes of some priests who preach to the faithful have often been inadequate. It is thanks to God that the Church is changing, and not because of our virtues. Jesus did say that he will be with his Church until the end of time. Whatever the difficulties within the Church, Jesus told us in the Gospel of Saint John that: “Do not be afraid! I have overcome the world and its challenges.”

“I personally think we should move towards federalism, with several states. This is also the view of many Cameroonians. We may change our constitution and erect the 10 regions in Cameroon in 10 federal states. It will be difficult for us to avoid going towards federalism. Having 10 federated states does not mean that Cameroon will not be a united country. The United States has 52 federal states, in Nigeria there are fifty with elected governors. Whenever we raised the issue of federalism in Cameroon, one is immediately accused of trying to divide the country. This is not true..

Federalism presupposes a central authority. When you are in Nigeria for example, you realize that federalism was a factor of development, and you can tell the difference between development and state and one driven by the central authority of the federal government. While home regions of Governors are appointed and do not derive their power base. Things are clear. We do not need to study political science to understand. “

On the political change

“Actually, the solution seems to be to consider a transition period of three years, with the condition that the head of state elected by the transition, does not show up in the presidential election at the end of his term. During this period, the strong democratic institutions will be in place before the organization of free, transparent and fair elections in which each candidate or each political party will present his political philosophy or his projects to Cameroonians who will elect to power a President of the Republic legitimate and democratically. As was done in Burkina Faso and the Central African Republic. “

The impossibility of a revolution in Cameroon

Cameroonians do not have that courage. If Cameroonians were revolutionaries, we would have long had social movements or claims of a certain scale. I have met some African observers who said that if the situations we live occurring in their country, they would have entered into civil war and that in Cameroon; it is as if everything was fine.

By the way I have to tell you that I am writing a book on the natural moral and human morality. God gave us the law that governs us from our hearts and that is lacking in other creatures. “Do good, avoid evil”, that is the lesson we should give children so that they incorporate it into their way of being, for their good and the good of the country.

For those who have the power, they know they will give account to God, because they govern the people created by God. For Cameroon, the head of state knows he will report its governance before God. For example, God will ask him, ‘how have you ruled Cameroonians that I entrusted to you?’ ‘. 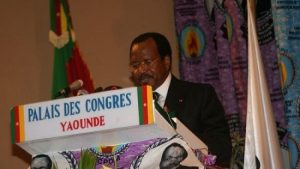