The chartered members of the Biya Francophone Beti Ewondo regime have extended their tribal war into Cameroon football. In the early evening of Sunday, March 12, 2017 at the Yaounde military stadium, the Sub Prefect of the Yaounde 3rd district tried in vain to postpone the match Tonnerre kalara club (Tkc) of Yaoundé against Botafogo of Douala for what the Biya appointee noted was a threat of disturbance to public order.

The match of the 3rd day of the national championship Ligue 2 opposing Tonnerre Kalara club of Yaoundé against Botafogo of Douala initially scheduled to begin at 2.30 pm at the Military Stadium in Yaoundé finally started around 5 pm. The kick-off recorded nearly two and a half hours delay due to a war of words verbal between a group of people headed by General Pierre Semengue, the President of the Cameroon Professional Football League and another group led by Emile Onambele ZIbi, leader of one of the two factions fighting for the management of the Thunder Kalara club of Yaounde (TKC). Tonnere produced international football legends like Roger Milla, George Opong Weah, Salla Mensah and Ndoram

Despite an impressive police and gendarme deployment after threats of disruption of the match, Emile Onambele ZIbi and his supporters found themselves inside the stadium to prevent the unfolding of the game. Biya and his kinsmen have reportedly destroyed every aspect of Cameroonian life including the Roman Catholic Church. 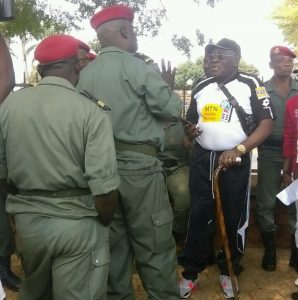