The big men from Yaoundé who traveled to Bamenda for a pro Biya Francophone political rally were almost lynched and are currently hiding in Ayaba hotel, Cameroon Intelligence Report has learned. Jean Nkuete, 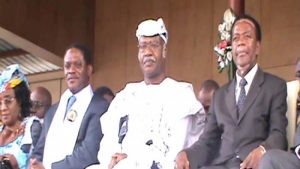 the Secretary General of the Central Committee of the ruling CPDM and the Francophone spy turned Prime Minister, Philemon Yang,  were caught in the murderous riot that took place yesterday Thursday, December 8, 2016 in the chief town of the Northwest Region before police and  the military took control of the situation.

The freedom fighters now referred to in La Republique du Cameroun as rioters had taken possession of the city and barred all entrances. The angry population succeeded in burning some police stations and other buildings used by the Francophone regime to terrorize Southern Cameroonians. The freedom fighters also threw projectiles against the convoy of cars that transported the Prime Minister and Head of Government.

In the whirlwind of violence, the secret service gathered all the barons of the ruling CPDM crime syndicate in Ayaba hotel. The Prime Minister, Jean Nkueté, Atanga Nji and all the other senior cadres of the CPDM are presently held in Ayaba, under the protection of the police. Some of the young people who tried to force their way into the hotel were arrested. At the time of filing this report, information filtered that Jean Nkuete was escorted out of Bamenda by a heavily armed security vehicle.  We also gathered that armed with cutlasses and catapults, a small group attempted to get hold of Minister Atanga Nji’s son, a student at Sacred Heart College Mankon.

The English-speaking part of the Cameroon, constituted by the regions of the Southwest and North-West, has been prey to a wave of protests and demands for several weeks. Anglophone teachers and lawyers complain about their conditions on the one hand, and on the other hand, a good part of the local population demands a return to federalism or a Southern Cameroons state.

French Cameroun: A Policeman And Nurse Killed Within 3 Days By Boko Haram

‹ Many feared dead in Bamenda as military helicopter use live ammunition on protesters › Anglophone Uprising: Biya orders a complete “military invasion” of Bamenda