At 10th Anniversary Mass: Bishop Nkea says Father Agbaw-Ebai loves the Church with his whole heart and he’s is not just a Catholic priest but he is a true son of the Church

HOMILY AT THE MASS OF THE TENTH ANNIVERSARY TO THE PRIESTHOOD OF REV. FR. MAURICE AGBAW-EBAI

My dear brothers and sisters in Christ,

Today is a very important day in the life of Rev. Fr. Maurice Agbaw Ebai, Priest of the Diocese of Mamfe, Cameroon and Pastor of St. Anne’s Parish in the Archdiocese of Boston, United States of America. On this day, we have all joined to render thanks to Almighty God, who ten years ago, called Fr. Maurice to make a complete and irreversible donation of his entire life to the service of and to pour out his life as a libation for the redemption of souls. On this day, ten years ago, Fr. Maurice died with Christ on his altar of sacrifice, and after his ordination, he could say with St. Paul, “it is no longer I who live, but Christ who lives in me.” Jesus Christ his Son, and to the Church that is One, Holy, Catholic and Apostolic. On this day, ten years ago, Fr. Maurice prostrated himself before God and the Entire Church gathered in prayer, to empty himself of himself

My dear people of God, gathered here with Fr. Maurice Agbaw-Ebai to celebrate his tenth anniversary, I welcome you all to this great day in the life of this priest and I want to apologize  that I could not stay in America long enough to be present at this occasion which I had agreed to preside over and preach. But since urgent duties recalled me home to the Diocese of Mamfe and the Church in Cameroon, I decided to ask Fr. Dieudonne Akawung, the Diocesan Finance Administrator to come to Boston and to preach this homily on my behalf which I had written to preach myself. I know that Fr. Dieudonne will deliver the homily well on my behalf, but the only difference is that he will be delivering the homily without a miter on his head. Some people in Mamfe had asked me if I was going all the way to the United States to celebrate only a tenth anniversary, the what would I do if it were a silver Jubilee? My answer to them was a quotation from the Psalmist who said “One day in his house is better than a thousand elsewhere” and again, the same Psalmist who said in another instance that “a thousand years for God is like a day just come and gone”(Ps.90:4). To be a priest even for one day only, brings a lot of glory and honour to name of Jesus Christ who is the Supreme High Priest of the New Covenant. If after nine years of seminary formation, a priest had the chance to celebrate only one Mass and died, he would have fulfilled the reason for his ordination, because his first Mass and  the Mass of his  golden Jubilee in the priesthood is one continuous sacrifice, during which he re-enacts in an un-bloody way, the bloody sacrifice offered by Jesus Christ on the Cross for the salvation of the world. Therefore, this celebration is not about Fr. Maurice, it is about glory and honour to the Name of Jesus Christ whom he has been so blessed to serve with devotion and loyalty all these ten years.

However, while we give honour and glory to God, we must remember the quote from St. Augustine who said “Without God, we cannot. Without us, God will not”. It is in this light I wish to join you all and say to Fr. Maurice, a big Congratulations on your tenth anniversary. Within these ten years, God has used your hands to dispense his blessings to thousands of people, God has used your mouth and your voice to bring his Good News and consolation to thousands of Christ’s Faithful. Within these ten years, God has used you to bring absolution and forgive the sins of thousands of people everywhere in the confessionals. Within these ten years, many have been born through you in the waters of baptism, and above all everyday, you have stood in the place of Christ to celebrate the Eucharist and raise the cup of salvation on behalf of the people of God entrusted to your care. Fr. Maurice and many of us will now understand better what St. Augustine meant when he said “without us, God will not”. Thank you Father Maurice for making yourself an instrument in the hands of God for all these years so that God’s graces may come down from heaven and rest on his people on earth. Through you, heaven is wedded to earth and man is reconciled with God. For this, we can only say “Glory be to God on high, and congratulations to you, man of goodwill.”

In the Letter to the Hebrews, it is stated that every high priest has been taken out of mankind, and is appointed to act for men in their relations with God, to offer gifts and sacrifices for sins… No one takes this honour on himself, but each one is called by God as Aaron was (Heb. 5:1-4).

The priesthood thus is a gift and at the same time, it is a mystery. It is a gift in the sense that it is freely given by God. That is why Christ says in John 15:16 that you did not choose me, no, I chose you; and I commissioned you to go out and to bear fruit, fruit that will last. 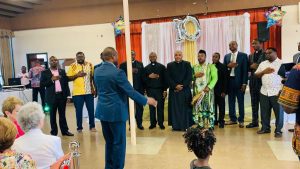 There are two things I would like  you people to understand today about priests on this day on the tenth anniversary celebration of Fr. Maurice .

The first is that Priests called by God are human and sinners like all other people. That is why St. Paul Says in 2Cor. 4:7; that we are only earthenware jars that hold this treasure, to make it clear that such an overwhelming power comes from God and not from us. Priests fall down in different ways from time to time. The twelve Apostles called on Holy Thursday to be priests were men, with faults and failings. Fr. Columba, an Irish Priest said in one of his homilies  that The first Pope, St. Peter was rash and bad tempered. He also denied Christ in His hour of need. St. Mathew was a swindler who co-operated with his country’s enemies. And poor St. Thomas wasn’t too sure about what he believed or where he stood. If God only relied on the virtuous and the perfect, he would have very few (or no) priests. I for one standing here would not even come any where near the altar.

In this regard, I want to say that most often Christians see the man in the priest and not the priest in the man. Many people only look at the man in the priest, and some people may not even believe in the miraculous work of God through the priest. But when we look at the priest in the man, we transcend his own petty weaknesses and see the grace of God at work in us through the instrumentality of human beings. It is in this connection that the church teaches us about the principle of ex opereoperato to mean that the efficacy of the sacrament does not depend on the worthiness of the priest. He is a simple instrument that has to struggle for his own salvation in fear and trembling.

The second thing I want you to understand about priests is that their life is not their own. They have offered it to the church and they do everything according to the mind of the Church. They must conform therefore not to the standards set by men but to the standards set by God and the Church. These standards come out in the way they minister to their people. Before you think of the one wrong of a priest, remember the thousand good things he does for his flock daily. Satan exists in the community to ruin it. The priest is a good and struggling man. His goodness is and should not only be seen when de dies. Always be ready to appreciate what a priest does for you, never take it for granted.

From the day Fr. Maurice Agbaw-Ebai was ordained a priest in the Diocese of Mamfe, he has done his work to the best of his ability, and like his Bishop, I want to use this chance to thank him for the priest that he has been. The real seminary for the priest is the Ministry, and thus we rise and fall in our attempt to give our all to God. The one thing I know for certain about this priest, all his human weaknesses notwithstanding, is that he loves the church with his whole heart. He is not just a Catholic priest but he is a true son of the Church and he is ready to defend the doctrine of the Church with such passion that could be seen only in the likes of St. Irenaeus, St. Athanasius and his mentor in the faith, Pope Benedict XVI. I encourage him on this day that his faith may never fail, so that he may always remain a source of strength to his brothers and sisters in Christ. I invite all of you in this Church today to pray in a very special way for our celebrant, that he may remain faithful to Christ, loyal to the Church, fervent in prayer and constant in love for the Christians he serves in the Archdiocese of Boston.

I wish each and everyone of you a very happy celebration, and once again to Fr. Maurice, Happy tenth Anniversary and God bless you all.