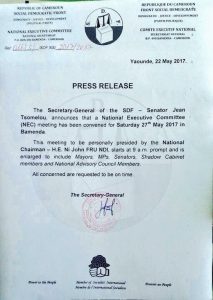 The Secretary General of the Social Democratic Front, SDF has announced the holding of a National Executive Committee meeting in Bamenda.  Cameroon Intelligence Report sources say the session will be extended to Mayors, Members of Parliament, Senators, members of the Shadow Cabinet and the Councilors’ Cell.

Senator Jean Tsomelou did not make public the reason behind the holding of the emergency Bamenda NEC meeting on the 27th of May 2017. However, what we do know is that the NEC members will be discussing sanctions against mayors and senators who defied the orders of the National Chairman Ni John Fru Ndi.

The SDF leadership has called on all its elected representatives and militants to boycott the so-called National Day celebrations. However, some mayors and senators were seen participating in the parades marking the 45th edition of the Francophone imposed National Day of Unity.

‹ Britain has to settle its debts before withdrawal from the European Union › Manchester Attack: ISIL claims responsibility