Will truth about Bishop Balla’s death ever be known? 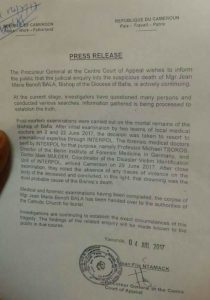 The Francophone political elites running the ruling CPDM crime syndicate have released a statement on the late Bishop Jean Balla affair. The document described by our senior intelligence officer in Yaoundé as fake and misleading was signed by the Attorney General of the Court of Appeal in the Center region. The Attorney General for the first time in the history of our nation issued a press release in the English language in which he revealed that the Bishop of Bafia may have actually died by drowning.

The Biya regime document attached to this report used the appellation “Procureur General” instead of Attorney General indicating that it was written by a French speaking Cameroonian. The said document spoke of a post-mortem examination that was carried out on the remains of the Bishop of Bafia by two Cameroonian medical doctors on the 2nd and 22nd of June 2017 but did not make public the names and the findings of the local medical practitioners.

The so-called Procureur General was quick to publish the independent, preliminary autopsy performed on the body of Bishop Balla by forensic medical doctors whom the Yaoundé regime claimed to have hired via Interpol including naming the experts: Professor Michael Tsokos and Dr. Mark Mulder.

Cameroon Intelligence Report understands the hierarchy of the Episcopal Conference of Cameroon was never consulted by the government over the decision to conduct an independent autopsy. It is evidently clear that the Cameroonian doctors had conducted an unbiased examination of the late Bishop, who was killed in circumstances that remain unclear.

A highly placed Cameroon government official was heard murmuring privately that any statement from the investigation team should have been accompanied with autopsy diagram presented to the Cameroonian people in a news conference. The European autopsy noted the Center Region Attorney General did not reveal signs of any violence which casts doubt on an earlier popular revelation that Bishop Jean Balla was strangled.

Jean Fils Ntamack was adamant in his political declaration that he would need to continue with the investigation and that the body has been handed to the Roman Church leadership for burial. Bishop Balla’s clothing was not available for Prof. Michael Tsokos and Dr. Mark Mulder to examine, though it was almost certainly examined during the late Bishop’s first autopsy performed by Cameroon medical examiners.

In a country where judge and jury are the same, Jean Fils Ntamack observed that drowning was the most probable cause of the Bishop’s death. This is consistent with the note that was left in the Bishop’s car. The government did not announce they would conduct a second autopsy, so Roman Catholic authorities should conduct a third. Results of the first, official, autopsy have not been publicly released, though we reported with files from our sources that the Bishop of Bafia was brutally murdered.

Pope cries as he discusses Ukrainians’ plight during traditional prayer