An intelligence source has revealed that General Ivo Yenwo has been relieved of command as head of the presidential security. The source also hinted that all senior Anglophone army officers who had control of military hardware in mechanized divisions in Yaoundé have also been removed from their positions of authority. The Biya anti Anglophone stance seen by many as unprecedented has reportedly gotten the backing of French multinationals such as Bollore Group and ELF that have been extremely nervous of the possibility that the lucrative part of Cameroun may soon break away in these unfolding West Cameroon crises.

Cameroon Intelligence Report is yet to confirm the correctness of this developing trend. However, a document recently sent to us via email from Yaoundé, noted that the French were already planning a Cameroon after Biya and were deeply concerned with the power structure of the Cameroon Anglophone Civil Society Consortium. The email stated that Biya gave the French some kind of assurance that he was going to resolve the Anglophone problem. But events are seemingly getting out of his control even with the French Advisors encamped in Yaoundé.

In the said document, Biya angrily promised that his government was going to apply force to maintain the unity of the country if the Anglophone lawyers and teachers failed to reach an agreement. Already, the Yaoundé regime has started with guerilla tactics burning the car in an attempt on the life of the Secretary General of the Consortium, Dr. Neba Fontem. The attack has been blamed on Minister Atanga Njie and the Mayor of Buea, Ekema Patrick by people within the Dr. Neba Fontem entourage.

We gathered that the French Oil Company, ELF has sent its Deputy and Security Directors to join President Biya’s think tank group on the Anglophone crisis in Yaoundé.  Elf will lose billions of Euros if the Bakassi Oil fields in Southern Cameroons were no longer under the control of La Republique. The Cameroonian dictator was planning to invoke emergency measures in the country’s constitution to suspend the constitution and make public decrees that will ban protest by teachers’ unions, lawyers, doctors’ union, civil society, and political parties. He was cautioned not to take that line by a tribal secret service that is aware of his deteriorating health situation and divisions within the army and the political bureau of the ruling CPDM party.

Correspondingly, the French are now in control of the security apparatus of the nation and are slowly but surely pushing the Beti and Boulou army generals to stage a coup, suspend the constitution and ban all labor union and political activities for several years. The French understanding is that this move will effectively halt the Anglophone demands for secession. We are told that the Francophone army generals will replace all the regional governors and SDOs and France will lobby the European Union to recognize the military junta. 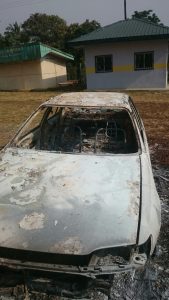 By Sama Ernest in Yaounde