The Venezuelan military has launched large-scale drills to bolster its combat readiness after the US threatened that it could use military force to oust the elected government of President Nicolas Maduro.

Madruo traveled to the central state of Miranda on Sunday to inspect the troops and military equipment stationed there and attend the opening ceremony of the maneuvers, which will be held across the country and will last until February 15.

Addressing thousands of soldiers at a camp, the president said the war games will be the “most important” drills in the country’s 200-year history. 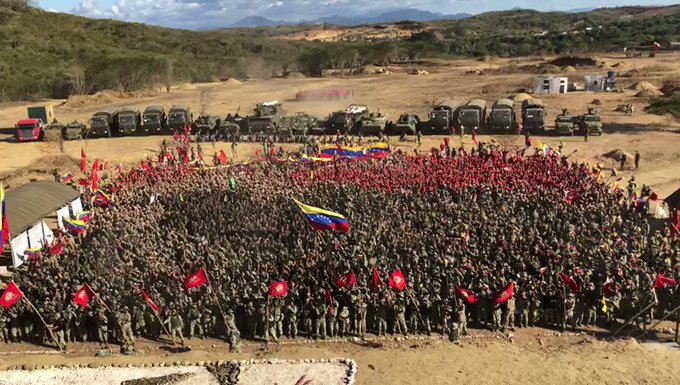 Maduro also called on all Venezuelans “to join this comprehensive national plan for the defense of sovereignty and peace. Love the country, and let that love become action. Defend the right to peace.”

The administration of US President Donald Trump hastily declared support for Guaido, announced sanctions on Venezuela’s oil industry and said sending military forces to the country was “an option” to push for the Maduro government’s ouster.

Guaido and the US have also been encouraging members of the Venezuelan armed forces to abandon the legitimate government and join the opposition camp, which has also the support of Washington’s European and Latin American allies.

Last week, Maduro told Russia’s RT that the military was prepared to ensure that Washington will pay “entirely too much” for any military invasion against the “sacred homeland.”

“I don’t believe in war, violence or military threats,” he said. “Whatever they want, there will be peace in Venezuela.”

Maduro’s Foreign Minister Jorge Arreaza said that his country was prepared for any possible scenario.

“Our Armed Forces are prepared. We have a professional army of more than 200,000 personnel. We have an additional 2,000,000-plus paramilitary force… We are prepared for any scenario,” he said.

Guaido has not ruled out that he could take a “controversial” decision to “authorize” a “humanitarian” intervention into Venezuela.

His remarks drew a response from US Democratic congressman Ro Khanna, who said, “You can proclaim yourself leader of Venezuela but you don’t get to authorize US military interventions.”

“Only the US Congress can do that. We will not,” he said in a tweet on Saturday.

Maduro has warned Guaido “to abandon his coup-mongering strategy,” calling on him to “think carefully about what you are doing.”