Imagine if your family was killed in front of you. Then, with no time to process what has occurred and or grieve, you are forced to hide in the wilderness for months to save your own life. After some time, some local non-governmental organizations and UN agencies find you and provide you with food, clean water, shelter and some soap. Then one day, even that little assistance is forced to be suspended, or even worse, stopped.

That is the reality that most Cameroonians in the English-speaking parts of the country live in today.

It has made the crisis in the English-speaking parts of Cameroon, as well as the other emergencies in the country (related to the Boko Haram crisis in Cameroon’s Far North and the influx of refugees from the Central African Republic in Cameroon’s East and North), among the most neglected and underfunded humanitarian crises in the world.

In the English-speaking North-West and South-West regions alone, there are more than 1.3 million people in need of aid – which corresponds to a third of the local population. This is an eight-fold increase compared with 2018, when 160,000 people were estimated to need humanitarian assistance in those regions.

This past January, Dorothy, 65, watched her husband and three of her five children being killed in front of her. She had to find the strength to pull her two other children and run. They have been on the run and in hiding ever since.

Dorothy* has been living in the wilderness since her home was burnt down in January 2019.

“In the course of running, I even badly hurt my leg and it is still badly swollen – I cannot afford to go to the hospital and I am scared to go into the big town,” Dorothy said.

“In the bush, I sleep under a tree and we don’t even have blankets, we eat mostly roasted cocoyam (taro) and plantains. There are snakes that can harm us and when it is raining, we suffer more.”

Dorothy often feels the urge to return to town but fears for the lives of her remaining children. “Sometimes we go for days without bathing. I am tired of living in the bush.”

Dorothy stands at the spot where her husband and three of her children were killed in what used to be her home.

The humanitarian community is working in a highly volatile environment with many access challenges, including ongoing insecurity, confiscation and impounding of humanitarian supplies, regular ghost towns and lockdowns – which can paralyse humanitarian action for days – and a few attacks on aid supplies, most recently on 23 June.

Despite this very challenging operational environment, humanitarian access is possible and needs to be accompanied by the delivery of assistance, so as not to erode the trust built with the local population. Humanitarian partners continue access negotiations and have been able to reach more than 125,000 people with humanitarian assistance so far in 2019.

Locally displaced people at the weekly food distribution allowance. Each family received 5kg of rice and 1 liter of palm oil.

Peter,* 50, is a single father of five children. Two years ago, he was managing a community water project in one of the English-speaking regions. “It was a good job and I was able to provide for my children up until the day I was attacked.”

In September 2018, his right hand was cut off during an attack.

Peter is a single father of five children. His right hand was cut off during an attack.

“I immediately collapsed with blood pouring out,” he recalled. The villagers called the mayor, who rushed Peter to the hospital.

“I was in the hospital for about two weeks – I wanted to come home to be with my children. It was a terrible time and I was so scared the attackers would come back and harm my children,” he said.

Now living with a disability, he has no source of income. His family depends on neighbours and well-wishers to feed them.

His children are at home, as the local school was closed after the teachers were threatened and quit their jobs. “We need our schools open and we need peace now.”

For the past three years, a ban on education has defined the daily life of children. Today, 80 per cent of schools are closed, with some 700,000 out-of-school children, and at least 74 schools have been destroyed. Since 2018, more than 300 students and teachers have been kidnapped. After traumatic experiences, they have all been subsequently released.

Many schools have been destroyed in the English-speaking regions of Cameroon. Teachers and students have been kidnapped. The remaining schools function under tremendous pressure.

Attacks on medical staff and infrastructure have become another characteristic of the crisis. Since the beginning of the crisis, several nurses have been killed, a dozen medical staff have been kidnapped, and at least three hospitals have been burned down. Forty per cent of health facilities in the North-West and South-West regions are not operational, and the rest are only partially functional.

A combination of prevailing insecurity, lack of funding and attacks on health care professionals and facilities have led to health centres being abandoned.

Dr. Smith is a surgeon at a hospital in the English-speaking part of Cameroon. The hospital where he works treats victims of the violent crisis, many of whom are wounded or die from gunshot wounds or machete injuries.

Dr David Smith *, a surgeon at a local hospital in one of the English-speaking regions

“We look after those who arrive pregnant from the bush and those who suffer from the difficulty of living in the bush with ailments such as malaria and snake bites,” he said.

Dr. Smith says that the hospital faces many other difficult situations. “At times the military come and takes away our wounded patients – and we never hear from them ever again.”

But their biggest problem is lack of qualified staff. “Doctors and surgeons don’t want to come to this region and work.” The hospital also lacks equipment. “We desperately need help to equip our theatres and wards, and urgently need maternity incubators, for instance.”

· Jul 12, 2019
“The international community is looking the other way.” @AlexCrawfordSky tells #Sunrise there’s been ongoing conflicts in Cameroon with separatists demanding independence, that’s led to “brutality” on both sides – “kidnapping rife, corruption rife”.http://po.st/RQkaG5 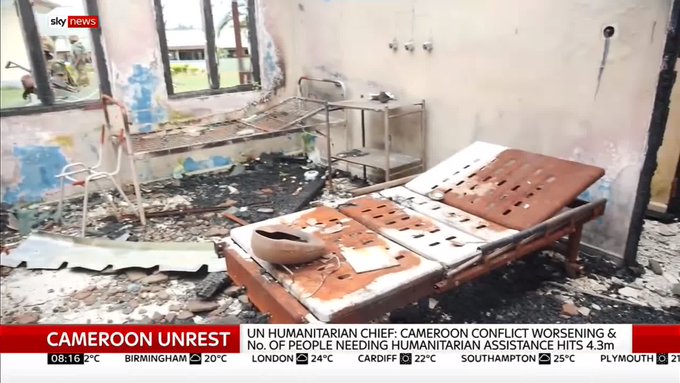 ‘It’s a really harrowing, horrific situation.’@UNReliefChief Mark Lowcock reacts to @AlexCrawfordSky‘s report on the independence war in Cameroon, calling it “one of the world’s least reported” and “most harrowing conflicts”. 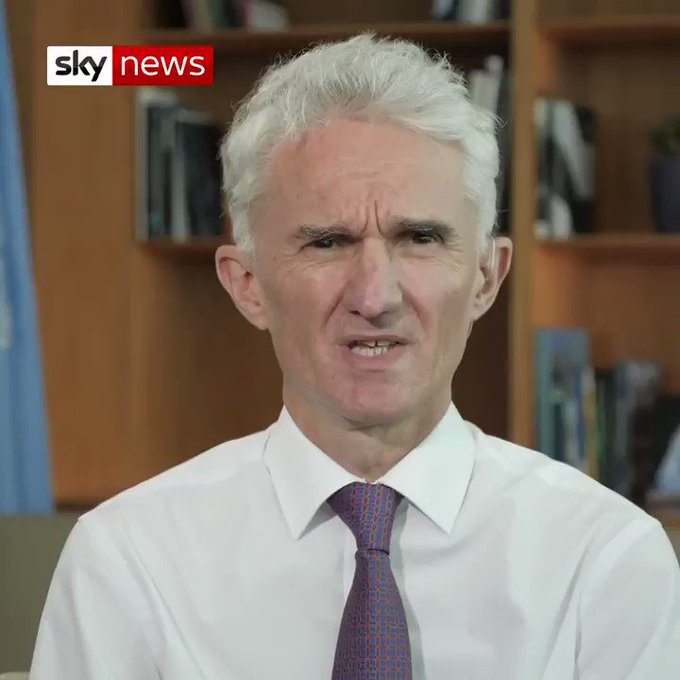 All the efforts to provide assistance to the affected people are being jeopardized by the lack of international attention and critical lack of funding.

The overall humanitarian response plan for Cameroon this year requested about US$300 million, but remains severely underfunded at only 19 per cent.

For the North-West and South-West regions in particular, aid groups need $93 million to support 820,000 people with humanitarian assistance. Only $14 million has been received so far. More funding is urgently needed to sustain the humanitarian response.

*Names have been changed.

Culled from the United Nations

Double Standard: Total Energies withdraws from Myanmar over worsening abuses but remains key sponsor of the Africa Cup of Nations

‹ Wimbledon: Djokovic edges Federer in longest ever final › Ambazonia: The state of the revolution