As Ambazonians continue to deviate from the focal point of the Southern Cameroons revolution, its worth reminding Amba citizens that revolutions are never straightforward or predictable. Ever since the controversial Chairman Elvis Kometa confirmed that IG funds were used to pay the rents of disgraced former Acting President Dr Samuel Sako, our readers have expressed their frustration and anger at the fact that the IG could afford to squander huge financial resources when thousands of Ambazonia Restoration Forces in Ground Zero were desperately seeking for support. Thousands of Ambazonia refugees in Nigeria and IDPs are in need of basic human amenities. To be sure, nothing came under Sako’s leadership.

Three weeks ago, Cameroon Concord News and Cameroon Intelligence Report opened a joint investigation to uncover the truth about the Sako-IG Affair. The process was challenging but rewarding.  We found out that immediately after his appointment as the Acting President of the Federal Republic of Ambazonia, Sako’s maiden call to the cabinet was that he needed $450 to repair his car. This amount was made available to him at lightning speed as a goodwill gesture by the treasury department. Our whistle-blower later opined that Dr Ikome Sako owned no car at the time of the said request. Later that day, he met with a cross section of the exiled cabinet and made another demand for more money citing his rents. During that meeting, Dr Ikome Sako also pleaded that he needed to be relocated for security reasons. The cabinet ministers were unanimous in their decision in support of the relocation. The house he lived in was dilapidated and looked like an abandoned Shakespearean building.

The agreement was for Pastor Ikome Sako to pay a portion of the new lease. However, as the IG was looking for a new accommodation that befits an Acting President, Sako moved his entire family into a hotel all paid from donations intended for Ground Zero. Sako made matters more intractable when he made another request insisting on relocating to a posh area where the cost of accommodation was $2500 a month excluding utility bills. Our chief intelligence officer in the USA has facsimiles of IG documents revealing that all Sako’s utility bills were paid for by the Ambazonia Interim Government including gas, electricity and local rates.

Immediately after settling in his new comfortable presidential home, Dr Sako surprised members of the Ambazonia Cabinet again!! This time around, the man of God informed the Interim Government that he needed $1000 to pay for his immigration paperwork to be regularised so he could travel outside the USA. Alarm bells started ringing but the IG was already in a marriage and the need to keep the Southern Cameroons revolution going was prominent on the agenda. IG classified papers show that the said amount was handed to him. One of most pathetic and appalling revelation made to our cream of reporters covering the IG was that Pastor Samuel Ikome’s children started going to school on UBER rides all paid for by the Ambazonia Interim Government. This was facilitated due to the fact that Sako had a government debit card. We can now reveal that Sako’s monthly expenses came up to approximately $8000. 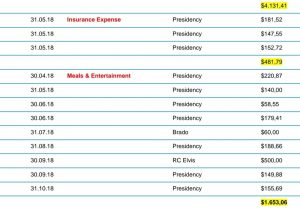 The disgraced former Acting President had lost his job as a security officer two weeks prior to his appointment as Acting President. His wife, a hairdresser, was the breadwinner as Sako’s venture at selling Christianity had failed woefully.

We gathered that the lease signed by the Ambazonia Interim Government for the property that Sako tenanted was for 12 months. With the financial scandal that rocked his reign and subsequent fiscal drought faced by the IG, the payments of Sako’s rents became irregular.

Ikome Sako’s landlord issued two eviction notices late last year. As the ‘free’ money dried-up, the lease couldn’t be renewed and we can confirm that on March 2019 he had no choice but to move to a modest and cheaper area of town. One of Sako’s acolytes who elected anonymity said ‘In Buea terms, Sako lived around Muea market before his rise to prominence. The IG moved and sponsored his twelve months stay in Governor Street. He has now moved to Small Soppo.’

For all the chanting by pro Sako comedians on social media that he is still the President, the people yelling unconditional support for him aren’t opening their wallets.  A senior Southern Cameroonian who helped us during this investigation noted that ‘sadly the former acting First Lady has to go back to braiding hair to support this lazy and dishonest pastor’

Sako has set out over the last few weeks to prove his critics right. Never again will Ambazonians waste so much goodwill and financial resources on an individual.

Louise Ndialle: Former US Undersecretary says schoolgirl was shot because mother refused to pay a bribe of 500 CFA francs