Sidonie Maboue pulled her hands out of the muddy water and sat down on a piece of fabric next to the bags of gravel that she and three of her 12 children filled that day.

“This gravel will be crushed, then sifted,” said the 45-year-old widow as she prepared to nurse her 8-month-old baby who had been strapped to her back. “If we’re lucky, we can find gold, but it’s difficult.”

Maboue works in the Kaye quarry, a gold mine abandoned by Chinese miners in early 2017 after two years in operation. Around her, a hundred people noisily searched for the yellow metal in the pits in Ngoe Ngoe, a village in East Cameroon with about 2,600 inhabitants.

Women hauled the earth, crushed the gravel and tended to the mechanized pumps that keep the holes from filling with water. Women and children collected the gravel from the muddy waters.

Last year, Maboue nearly lost her life when a hole collapsed at another open-air mine near Kaye where she was planning to collect gold. She takes these risks to feed her children, she said.

“If I do not do that, how are we going to live?” she asked. “Since the death of my husband, I am the father and mother of the house.”

In that accident, nine prospectors were buried under almost 33 feet of earth in the mine excavated by Lu and Lang, a Chinese mining company banned from operating in Cameroon in April because it lacked a license.

“The Chinese arrived with [Cameroonian] law enforcement to drive the villagers out of the mine sites to better exploit our resources,” he explained. “So the villagers were forced to come in the night, in the absence of the Chinese, to extract gold and find food for their families. It was during one of these nocturnal outings that the earth fell on them.” 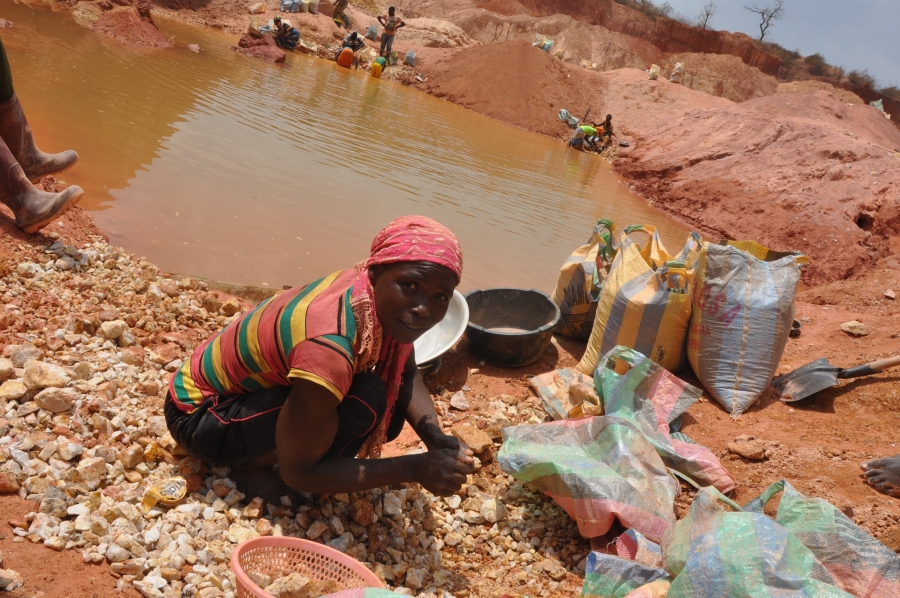 Sidonie Maboue, 45, a widow and mother, picks up small rocks from a mine site abandoned by Chinese miners. These pebbles are later crushed and sieved to collect gold.

Cameroonian law only permits local artisanal miners to search for gold using pans and other rudimentary equipment. But in recent years, Chinese operators who practice semi-mechanized artisanal exploration — including mechanical shovels and loaders, machines and chemicals that wash the gravel and other approaches — have altered the landscape significantly.

Local elites in Cameroon have partnered with the Chinese miners, according to the Center for Education, Training and Support for Development Initiatives in Cameroon, an NGO based in Yokadouma.

“They [the elites] are collecting photocopies of ID cards from villagers on the pretext of wanting to bring in companies that will provide water, electricity and jobs to the village,” said Victor Amougou, the center’s coordinator. “With 10 photocopies, this elite can obtain 40 artisanal mining authorizations equivalent to 40 hectares of land.”

Once the local Cameroonian obtains permission to mine, Amougou said, he or she signs a contract with a Chinese operator to run the mine. The Chinese, in turn, bribe mining authorities and other officials so they can begin work.

The law also states that mining operators must close their holes after completing their digs. Chinese companies usually abandon their giant pits, leaving behind dangerous areas where people and domestic animals might fall and drown. The Chinese companies also pollute rivers with their chemicals and mining runoff, said Moussa.

Last year, 50 people died in abandoned open mining holes in the Ngoura, Bétaré Oya and Ngoe Ngoe localities in eastern Cameroon, according to the calculations of the Forests and Rural Development, a Cameroon-based environmental nonprofit. About 250 mining sites opened between 2012 and 2014 have not been filled, the group added.

“It’s been a while since the Chinese entered my field and started mining gold without my advice,” said Philiphine Boh, a farmer and mother of five who said Chinese miners had destroyed her land. “The Chinese told me that it is the authority that sent them to exploit gold and that they will give me $130. I said that this money is insignificant for a field of one hectare that they spoiled. I have nothing left. 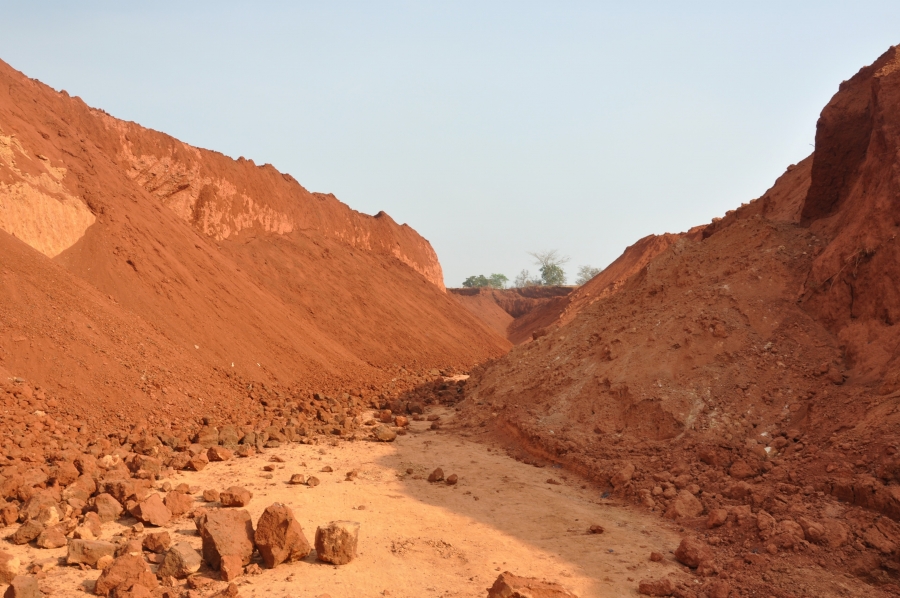 Locals rarely gain much from the Chinese investment in their region, others added.

“When the Chinese saw that a Nagbata [an artisan miner in the local language] discovered gold, they chased everyone from the quarry ” said Mahamadou Abdoulaye, 42, who holds a card entitling him to artisan mining. “The government must intervene because these Chinese are threatening us.”

Lu and Lang did not respond to a request for comment.

Still, the precedent was set more than a decade ago: Semi-mechanized artisanal mining was conducted for the first time in Cameroon in 2007 when the government requested that a South Korean company, C&K Mining, rescue 13 tons of gold that was likely to be washed away as officials pumped water into the impoundment behind Lom Pangar Dam in eastern Cameroon.

The authorities conceded the move would violate mining laws but said the situation was an emergency. The move served as a precedent for Chinese companies to engage in semi-mechanized artisanal mining.

Amougou and others said Lu and Lang is now operating a mine in Colomine in eastern Cameroon.

“The mining sector is a mafia,” Amougou said. “This crime does not benefit Cameroon or Cameroonians, perhaps an elite who would have received 5 to 10 million CFA francs [$9,376 to $18,755]. It’s shocking.”