Cameroon Concord News drew a tentative conclusion relating to the allegations made against Mr Milan Atam but has since received more information that raises more concerns on information posted by him in attempts to clear his name.  Due to public scrutiny this matter should not be swept under the carpet. No lead that may help in piecing together the pieces of the puzzle be ignored. Cameroon Concord News is aware of the treachery and corruption that facilitated the abduction and rendition of our leaders. The alleged involvement of persons who professed their commitment to the freedom of the Republic of Ambazonia; and relied on that to gain and abuse our trust cannot be a subject of a cursory investigation.  Cameroon Concord News therefore, revises and updates its tentative conclusion relating to Mr Milan Atam and others who have been adversely mention.

Like others who have been adversely mentioned, Mr Milan Atam benefits from the presumption of innocence.  Like others, he on his volition put out evidence to support his public statements in attempts to push back on suspicions cast on his conduct prior to, during and after the abductions.  Like in the case of others who have been adversely mentioned, there are critical matters he will have to clarify in relation to his role in the betrayal of the President, members of our Interim Government and the Ambazonia revolution. 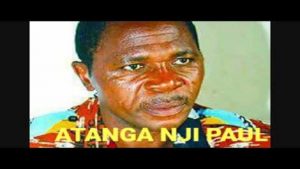 Cameroon Concord News has not ruled out the possibility that some of individuals adversely mentioned might have been brought into the conspiracy to satisfy distinct interests, some in search of power, others for pecuniary motives, informants and others in a more coordinating role. The enemy might have recruited them separately with each playing a distinct role.  Once the crime was consummated they discovered themselves in their respective roles and realized the extensive web of conspiracy and the faces behind it.

Cameroon Concord News has it on good authority that had the captives been executed immediately after abduction as was preplanned, some of actors who had infiltrated the Interim Government and other layers of the Ambazonia revolutionary struggle would have been eliminated as well. The intention of the principal perpetrators of the crimes was to conceal all traces of incriminating evidence pointing to the corrupt cartel of government officials and members of the intelligence units involved.  It is the fear of this possibility of eliminating the conspirators in and out of the IG that probably scared some participants in the joint criminal enterprise to raise an alarm that prompted a change of plan and the rendition of our leaders to French Cameroon instead.  Cameroon Concord News is interested to know if any of the persons adversely mentioned established contact with person(s) within the corridors of power or the intelligence services in French Cameroons, before, during and after the abduction of our leaders.

Cameroon Concord News is aware of public a statement revealing the prospective abduction of the president prior to the holding of the reboot conference intended to delegitimate him and the Interim Government. The maker of that statement Ebenezar Akwanga has been vilified as an accomplice in the abduction and rendition, Cameroon Concord News. It may well be that he was privy to the information or the intelligence about the prospective abduction from accomplices who were seeking to secure his support to delegitimate the President and Interim Government.

The enormity of the crime committed jointly by Nigeria and French Cameroon requires that Mr Akwanga clarifies his statement on this matter.  Because the preplanned decision to execute the President and members of the Interim Government did not materialize, the possibility of the participants in this international crime being investigated and prosecuted at some point in time by any one of the several countries interested in the investigation became apparent. The elaborate corruption scheme and huge amount of money laundered must elicit legitimate concerns and enquiry from international investigation organs.  This is a potential nightmare to each of the coconspirators who hence will never know peace.   After the rendition of our leaders to French Cameroon, therefore the coconspirators seriously considered the possibility of reviving the idea of executing our leaders as opposed to putting to them to trial.  They feared that a trial will be publicly watched by the international press, members of the diplomatic community and international human rights organizations. They feared that a court-martial which they may likely face will be strenuously opposed by the international community because it violates International law. A court-martial will offer a tribune for the captives to lay out the restoration of the independence of the Ambazonia case.  The corrupt crime cartel in Nigeria and French Cameroun will come under scrutiny and the very ebullient Nigerian Press will bring the news to the attention of Nigerians and the world.  This option failed due to the mass demonstrations by Ambazonias at Nigeria Embassies worldwide.  That prompted Nigeria to seek and obtain guarantees from French Cameroun that the execution option was off the table.  Nevertheless, the energetic reaction of Southern Cameroons against Nigeria has exposed the hypocrisy of the Buhari/Osibanjo government who touted themselves are anti-corruption warriors and champions of human rights. Osibanjo on occasion flashed his credentials as a Pastor in support of his alleged intolerance to corruption. Prior to this case, those credentials had been called to question. The huge amount of money involved in this criminal deal, possibly the highest single corruption deal in Nigerian history in which he and Buhari and their intelligence chiefs are involved, will not go down without a thorough investigation as soon as they leave power. Buhari set the tone by investigating the Jonathan administration including his national intelligence adviser who is held in jail despite several court orders for his release.  Our prayer was  that Sisiku Ayuk Tabe and members of the Interim Government remain alive.  If they are, then it is not by the will of their abductors. It will be a victory for the people of Ambazonia ordained by God and God alone.