Teachers strike to be called off soon

1) That a new institutional framework to look into the problems raised by Anglophone teacher trade unions will be put in place by Wednesday 30/11/2016;

3) That this framework will meet and work in Bamenda for the convenience of the majority of members;

4) That the report of the framework will indicate timelines for implementation;

5) That the resolutions arrived at will be submitted to His Excellency the Prime Minister, Head of Government within a week of deliberations;

6) That when at least one other request is fulfilled on or before 30/11/2016, the strike shall be suspended;

7) That in the meantime, the elected officials of the various teacher unions will go back to consult with their general assemblies;

8) That the suspensions of the strike can be revoked anytime there is breach. 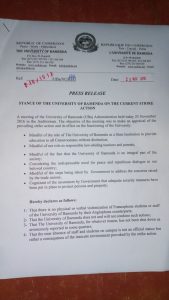